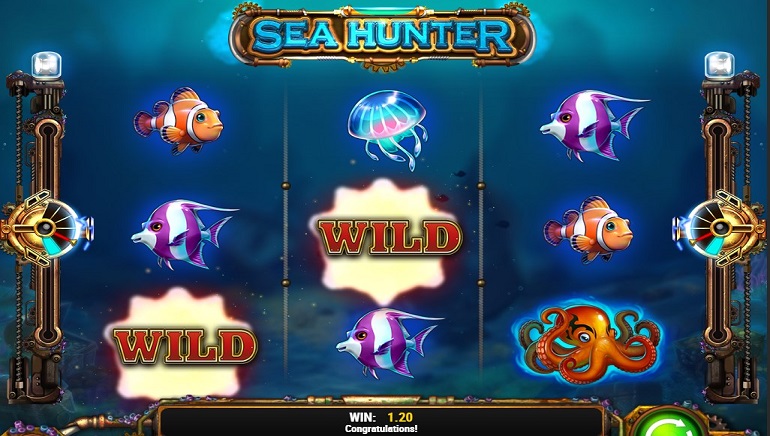 The underwater hunt is on! At least, it will be once you dive into Play'n GO's newest slot game, Sea Hunter, which is going live today.

The underwater hunt is on! At least, it will be once you dive into Play'n GO's newest slot game, Sea Hunter, which is going live today. Sea Hunter takes you down to the depths of the ocean, where you will use cannons to hunt for colorful sea creatures and score rewards along the way.

Sea Hunter is a 3-reel, 5-payline slot with vivid graphics and a victorious siren that sounds off anytime you land a win. Wagers range between .05 to 100 and the RTP is 96.33%. Reel symbols feature all sorts of sea life, including a turtle, whale, stingray, octopus, jellyfish, blowfish, and more.

The cannons are the main special feature in this game, and one sits on each side of the reels. There are meters on the cannons that get loaded up any time you score a win; when the meter hits certain benchmarks, the cannons fire, rewarding all different sorts of prizes. The meter resets to zero after any non-winning paid spin.

There are 4 types of cannon power-ups:

Growth Gun, which is triggered by 2 consecutive wins. Once triggered, the cannons fire 1 random type of symbol (not the wild). This and other corresponding symbols on the reels will be upgraded to the next highest paying symbol.

Sticky Shot, which requires 4 consecutive wins. Once triggered, you are awarded one free re-spin; at the same time, the cannons shoot at a random symbol that turns all matching symbols sticky for the free re-spin.

Wild Warhead, which requires 5 consecutive wins. This rewards 1-3 wild symbols randomly placed on the reels for your next spin, which greatly increases your chances for a big win.

Multiply Mortar, which is triggered by 6 consecutive wins and is the hardest power-up to activate. If you’re lucky enough to land it, you’ll get 1 free Win Spin, during which a win is guaranteed. The cannons will also shoot at the reels to multiply the reels up to 15x.