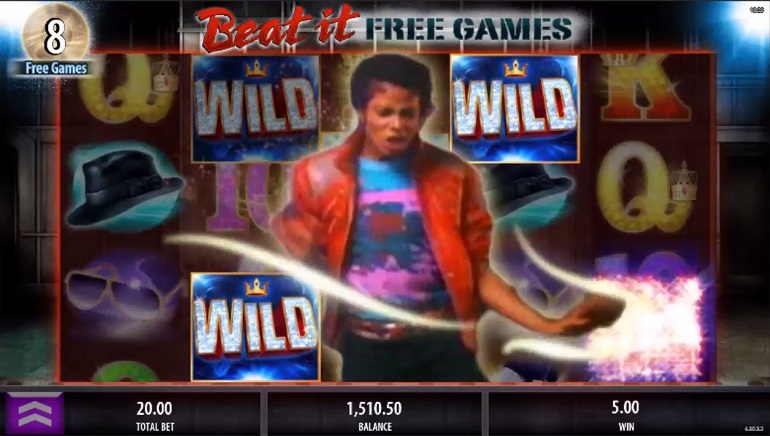 Michael Jackson: King of Pop is the first of three new slots to play at bet365 Games this July.

bet365 Games have three new titles for players to check out during July. Michael Jackson is there for music fans, Wheel of Fortune is for game-show viewers, and Pretty Kitty is for the cat lovers. All are now live over at bet365 Games.

From Bally Technologies comes an officially licensed Michael Jackson slot filled iconic imagery associated with the star, such as his black hat, glittering globe, and golden sunglasses. These appear as symbols that can land on the five-reel slot’s 25 paylines.

To win the 2,500x jackpot, players have to match five jackpot symbols on a payline. Another lucrative feature is the bonus wheel, which can unlock free spins and multipliers.

IGT has had the Wheel of Fortune licence for quite some time now, and the developer’s latest slot version is entitled Ultra 5 Reels. Considering that it has five reels, it is possible for players to win on 30 paylines.

The wild multiplier symbols can adjust to be worth from 2x to 5x when they contribute on a winning payline. Players can also target Scatter Wheels and an Ultra Wheel Bonus, which can determine how many reels will have special multipliers.

Completing the trio is Microgaming’s Pretty Kitty slot, which was just launched in June 2016. As the name suggests, the slot embraces a cat theme and where symbols of felines and jewellery can land on the five reels. Players can win 243 different ways over the 30 paylines.

The diamond collar scatter symbol is one of the most helpful in the game, as three or more will initiate 15 free spins. In the game, a scatter symbol can also result in multipliers when at least two land on the same payline. Additional features include wilds and expanding symbols.