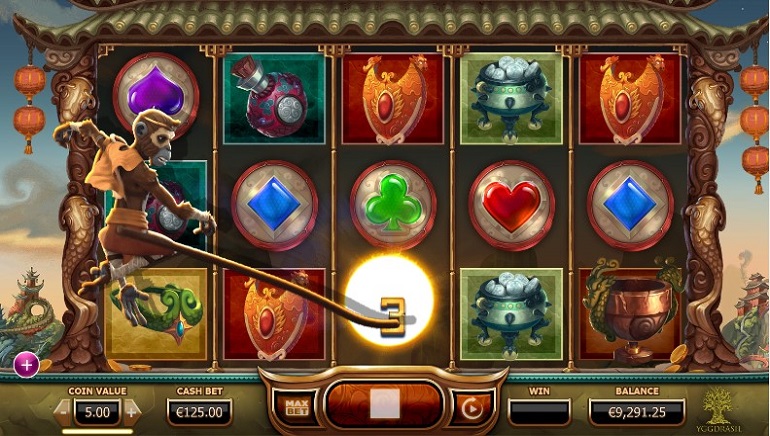 Get ready for an adventure to meet the Monkey King at Yggdrasil casinos. This brand new video slot is out now and loaded with rewards.

Yggdrasil casinos now have a brand new video slot called Monkey King, which is now available at the likes of Cherry Casino, Mr Green, and Unibet Casino. Current players of those sites can embark on an adventure to a mysterious mountain temple to find the Monkey King, who is known as Sun Wukong in Journey to the West, a 16th century novel from China.

Monkey King has been constructed as a video slot with five reels and three rows, but the more interesting aspect of the slot is that players can win all ways. By design, this means that players can win with three or more matching symbols on consecutive reels, even if they are not next to one another.

The treasure chest symbol is extremely valuable in the base game, as this can release up to 100 coins or trigger free spins. During free spins, this will add two additional free spins plus the 1,000-coin payout. Watch out for this symbol on the fifth reel, as it cannot appear anywhere else.

The Monkey King Feature is an outcome that will lead to special gifts from the legendary character, including the chance to keep sticky wild symbols as long the wins continue on each spin. To unlock free spins, players need to land three or more of these symbols on the screen. As a bonus, four will add 1,000 coins and five will add 5,000 coins.

Incremental wilds are rewarding because a wild symbol appears on reels two or four until there are six for the sixth and final spin. The next mode gives players stacked wilds, which will add permanently sticky wilds to reels two or four for eight free spins. Finally, starting wilds be active for 10 spins, adding a sticky wild to the centre and even more wilds.