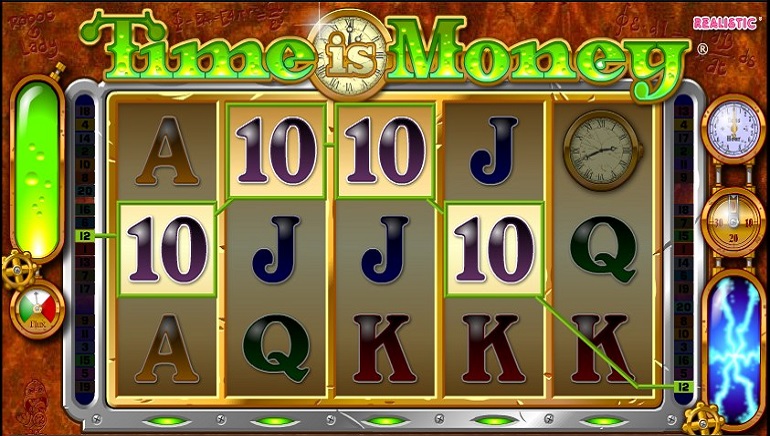 Time is Money is a new slot from Realistic Games that sees free spins, multipliers and a big guaranteed payout of 250x the stake awarded to anyone who completes enough free spins games.

British online casino games developer Realistic Games has announced the release of their latest slot. Time is Money sees players winning multipliers during a free spins round, followed by an award of 250x their stake.

About Time Is Money

With five reels and twenty-five paylines, the game sees  the classic 9 through to A playing card symbols along with bespoke icons such as a time traveller, his assistant and a robot. The clock is a scatter symbol which awards 12, 24 or 48 free spins with 3, 4 or 5 on the screen and these play out on a new set of reels with higher payouts.

During these free games, a Multiplier Clock appears and awards random 1x to 12x multiplier values to each win. Once a multiplier has been used, it can't appear again and when all 12 have been paid out, players win the 250x their total stake prize.

Other features include a wild symbol that substitutes for all others apart from the clock to help complete winning lines, while it can also pay out up to 5000x the line bet when making up a combination on its own.

Time is Money can be played across desktop, phone, tablet devices, iOS and Android platforms. Expect to find the game at Realistic Games casinos like LeoVegas Casino, bet365 Casino and Pocket Fruity Casino.

Andy Harris, the CEO of Realistic Games is quoted as saying: “Time is Money allows players to enjoy the time travel theme as well as having the opportunity of hitting the jackpot prize of 250 x their starting stake.

“We’re thrilled with the innovative free spins bonus and the multiplying clock feature, which we believe will help engage players and keep them playing around the clock.”

The company produces a wide range of games across their own platform and has been winning awards and nominations recently, with the 2016 Mobile Supplier of the Year title won at the EGR Awards ceremony, while their Fireworks slot was nominated for Game Of The Year in 2016.