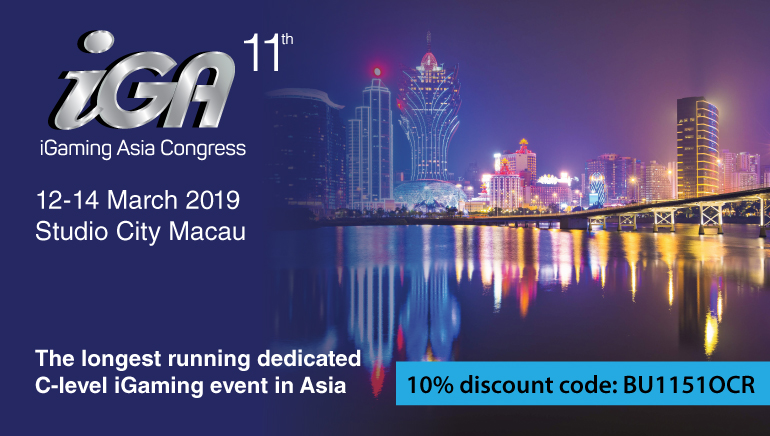 Led by its premiere movers and shakers, gaming in Asia just got a whole lot more organised and adapted across all regions at iGaming Asia last week.

The second decade of iGaming Asia was launched earlier this month —in an upscale venue appropriate to launch a bold new chapter.

The highlights of the 11th Annual iGaming Asia Congress took place from 12-14 March at Studio City Macau were abundant.

The vital pre-conference briefings entitled “Opportunities in the US” and “Operational - Setting up in Asia.” served to bridge the gaps between regional operators in looking to expand, ideally setting the table continuing market merging.

Attendees were galvanised by 10+ hours of networking over drinks at the conference's custom boutique bar Premiere, launching deals and harnessing incoming trends over an exquisite custom conference backdrop with aplomb.

The roundtable discussions at iGaming Asia 2019 proved comprehensive as well, empowering attendees on leading topics in iGaming today including Esports, Vietnam and Cybercrime.

The speaker lineup was the final jewel in the newly redone iGaming Asia. Speakers included YMCA of Greater Toronto Employment and Community Programs General Manager Adela Colhon, General Manager, Employment & Community Programs, who offers an amazing perspective from her unique background of country coordination in gambling awareness and promotion, employment and settlement to pan-European initiatives; Alphaslot COO Albert Yu, Alphaslot’s product development and business strategy leader who brought 10 years of global gaming industry insight to his discussion in winning the Asia Gaming Awards in 2016; and Inside Asian Gaming CEO Andrew W Scott, the Australian born gaming expert and media publisher who spoke about his legendary ascent to prominence in Asia with the formation of Macau's leading media company O MEDIA in 2009.

All in attendance left thrilled with the information they learned, the new contacts they made, and the new deals they launched to gain a foothold in the compelling Asian region.

Built to Last: iGaming Market is Fortified with the Tools for Growth, According to Latest Research