The Viking Gods Strike with Asgard Slots from Pragmatic Play 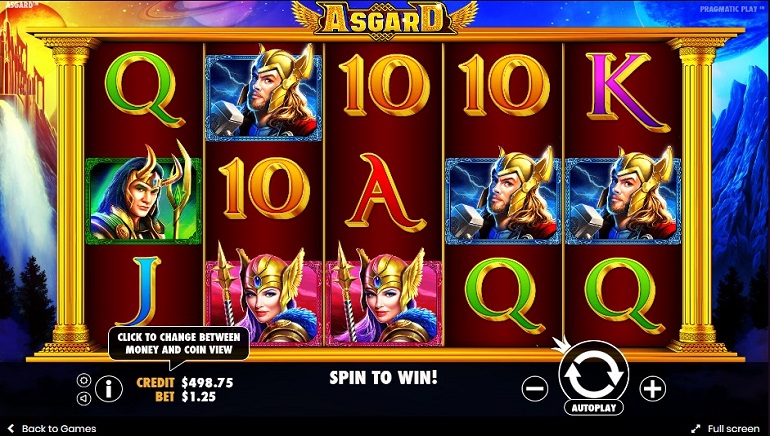 Asgard™ slot machine brings the legendary characters of Thor, Loki, Freyja, and Odin to life right before your eyes. As you might expect, this game is peppered with audio-visuals and feature-rich entertainment.

Asgard™ slot machine game is the latest wunderkind from Pragmatic Play™. The Norse God of thunder, the mighty Thor is ready to hammer home big wins for you in this captivating online slot machine game. There are 5 spinning reels, 3 rows, and 25 paylines of pulse-pounding entertainment. The action takes place in a parallel universe where King Odin rules a glorious empire. Loki, Thor, and Freyja will compete for real estate on your screen.

All the main characters are the high-paying symbols, while the 10, Jack, Queen, King, and Ace are the low-paying symbols. The Asgard Tower is the Wild symbol and it substitutes for other symbols to form winning combinations, except for the Bonus symbol. When you land 3 Bonus symbols (the glowing helmets), you will trigger the Bonus game. During the base game of Asgard™, the Royals can transform into Wilds, and there are even stacked Wild reels. Other features include Raining Wilds, Mystery Stacked symbols, and plenty of Free Spins.

Asgard™ slot machine game from Pragmatic Play delivers big when it comes to superhero-sized fun and games. Players will instantly recognize many of the memorable comic book characters such as Thor, Odin and Loki, and the Kingdom of Asgard. Rich visuals, and an orchestra of sounds will enhance every spin. The minimum coin value is $0.01, and the maximum is $0.50. Players can bet up to 10 coins per line, or a maximum of 250 coins. Once you hit winning combinations, they will be displayed alongside the gold-embossed WIN under the third reel.

Asgard™ slot game also features Autoplay functionality where you can automatically spin a pre-set number of times based on your set bet. You can disable Autoplay at any time. Other game features include quick spin, intro screen, ambient audio, or sound effects. There’s even a game history option to review your sessions. Find this one at Pragmatic Play online casinos.