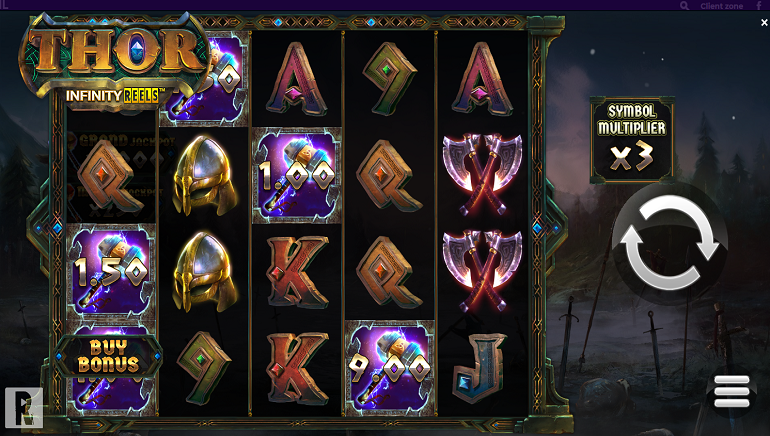 Under the partnership between Yggdrasil and ReelPlay has brought forth a new game featuring the mythical God of Thunder.

You cannot go wrong with Thor. The Norse God of Thunder, who has been a favorite character in the Avengers movies and countless other stories, shows, and films, is once again making an appearance, this time on a brand new high-action slot game by Yggdrasil and ReelPlay.

The game features Yggdrasil's innovative GATI technology which has become a fan-favorite. The game is now online and was released by ReelPlay. It features Thor, God of Thunder, son of Odin, champion of Asgard, and wielder of the powerful hammer Mjolnir.

Thor Infinity Reels is a great combination of breath-taking art, action, graphics, animation, and sounds. It is a great addition to both ReelPlay's and Yggdrasil's portfolios.

The game kicks off with three reels, but, with every spin, players are given the chance to add new reels. In doing so, players have greater chances for bigger wins and to reach the Jackpot. If the reel that is furthest on the right improves any spin combo, an extra reel is added. This can continue until there is a maximum of 15 reels on the screen, which will give a bonus jackpot of 888x times the wager.

If six or more Hammer symbols are hit, players will get the wildly popular Jackpot Respins feature, which awards prizes for each symbol on the reels. It is very cool to see happen in front of one's eyes and could bank a lot of payout across the Infinity Reels.

Stuart McCarthy, Head of Partner Programs at Yggdrasil, commented: “Launching yet another title through our YG Masters program powered by GATI ensures that players will continue to be provided with flawless gaming experiences.

“The gripping theme and progressive mechanics on display in Thor Infinity Reels™ makes it one of our most ambitious productions to date, and we look forward to producing more high-quality content as the year progresses.”

CEO of ReelPlay, David Johnson, commented: “We’re immensely proud of Thor Infinity Reels™ which continues to showcase the strength of our Sydney-based creative studio. Thor develops the bonus feature that has proven so popular in our Hypernova Megaways™ game and provides an Infinity Reels twist for a really stunning visual. Credit to the talented team at Yggdrasil, whose GATI technology enables ReelPlay’s games to continue to reach new audiences. We are delighted to see another game successfully deployed through the YG Masters program.”