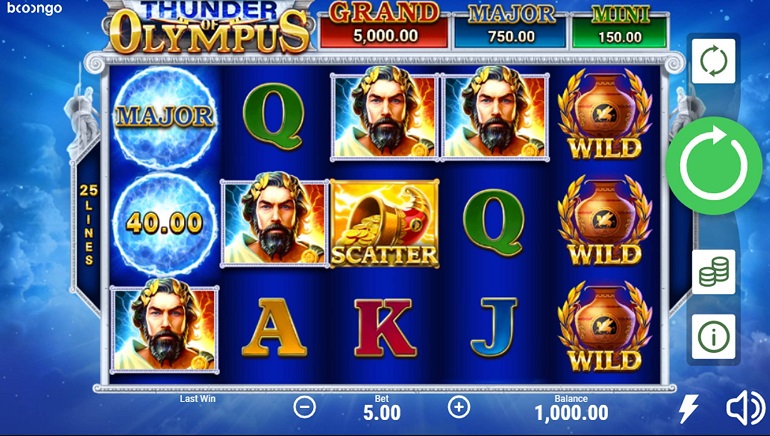 Booongo has added Thunder of Olympus to the Hold and Win series alongside Aztec Sun, Moon Sisters, and several other releases.

Mount Olympus is known in Greek mythology for being home to the gods. Booongo’s Thunder of Olympus slot explores the myths and legends in a brand-new release that appears in the software provider’s Hold and Win series that includes 15 Dragon Pearls, Aztec Sun, Buddha Fortune, and Moon Sisters.

Thunder of Olympus has been produced for desktop and mobile devices. The slot interface is displayed using five reels and three rows to show 15 symbols on each spin. There can be 25 paylines activated on each turn, with the wagering system enabling players to stake from €0.25 up to €60.00 on one spin.

In the gameplay, the most Basic symbols are the playing cards of J, Q, K, and A. For higher winnings, players are required to match three or more of the gods’ symbols. At the maximum wager, the player can win €600.00 by aligning five of the most valuable god.

Of course, there’s more to come and the special features include a wild symbol that has been given the power to substitute for every in-game symbol barring the scatters and bonus images. Although useful, the wild symbol isn’t quite as important as the scatters.

With two or more scatter symbols landing anywhere in view on the reels, players can collect eight free spins. And the advantage of free spins is that only the special symbols and most valuable images shall appear while the feature is active. Consequently, there will be no playing cards shown during free spins.

Thunder of Olympus also has blue lightning symbols that can trigger a bonus round in which the Mini, Major, or Grand jackpot tiers can be won. To reach the round, players need to gather six or more bonus symbols all at once. The Mini and Major jackpots can trigger at random, while 15 Grand symbols are needed to claim the largest pot in the game.