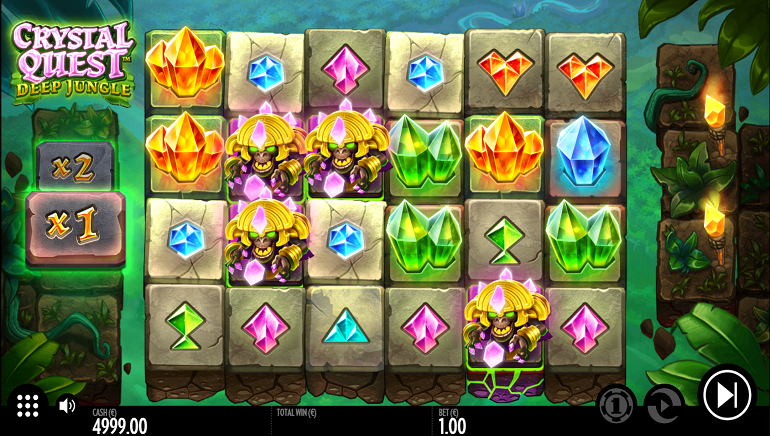 Deep Jungle is the first title to launch from Thunderkick’s brand-new Crystal Quest, which is an adventurous video slot series.

Thunderkick has launched an ambitious new series of video slots for autumn 2020 and into the future. From 14 October 2020, users can play the brand-new Crystal Quest: Deep Jungle slot at participating Thunderkick casino sites. Deep Jungle is the first of five new releases planned for the forthcoming series of Crystal Quest slots.

Crystal Quest: Deep Jungle stars a courageous adventurer called Gemma and who’s faced with exploring an uncharted world. Thunderkick has defined the video slot as being medium to high on the volatility scale, while the return to player (RTP) percentage has been tested as 96.14%.

Thunderkick’s Deep Jungle is reminiscent of the Gonzo’s Quest slot from NetEnt in that the slot interface is comprised of colourful blocks that can crumble and fall away after forming a cluster of three or more symbols to provide winnings.

This mobile-compatible video slot has been made with six reels and four rows, with players able to target 4,096 pay ways and a 15,000x max jackpot. When playing the slot, the available betting options vary from €0.10 to €100.00 and cover a dozen other values in between.

The Avalanche feature is fundamental to the experience by causing winning symbols to disappear from the screen and be replaced new ones from above. This can cause an infinite multiplier to increase with every instance of an avalanche.

Deep Jungle also includes the mystery feature that can cause base-game symbols to transform. A further feature is called Wild Explosion and this can cause a wild to explode and shake up the symbols if there are no wins during the bonus game.

To reach the bonus game, players will require three scatter symbols. After receiving 12 free spins, three new ones are added if two more scatters appear. During the bonus round, the multiplier will not be reset.