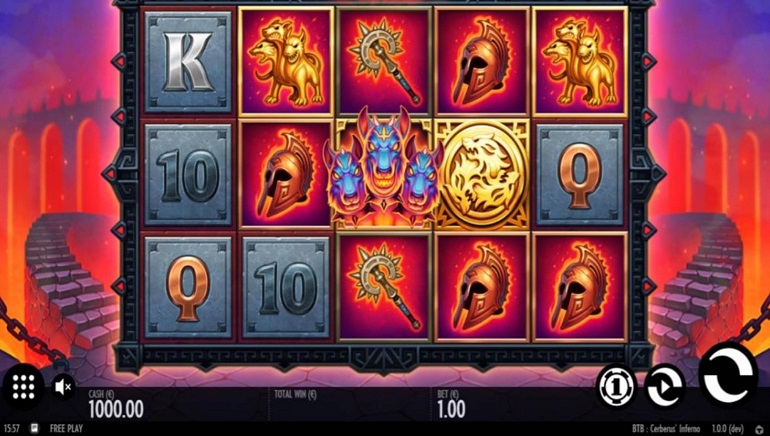 Beat the Beast: Cerberus' Inferno is the latest slot in a range of monster-themed games. It comes from Thunderkick and is set in ancient Greece.

Launched on June 10th 2020, the Beat the Beast: Cerberus' Inferno is the latest slot in a monster-themed range from Thunderkick. It's based on an ancient Greek tale and stars the fearsome three-headed dog that guards the Underworld. Players can fight this mighty foe across 5 reels and 9 paylines on their PCs or mobiles.

The reels, surrounded by a metallic frame, sit in the fires of Hell. Steps rise up behind, guarded by Cerberus, who appears as both a blue and gold monster, and a golden statue. Other symbols include playing card tiles, an axe, vase, and a helmet.

A firey wild symbol appears stacked on reels, making it easier to complete combinations. The golden Cerberus emblem is both an additional wild and scatter symbol. When it lands in any 3 or more places, the emblem triggers 10 free spins.

The Beat the Beast: Cerberus' Inferno slot changes to a 243 ways to win game for the free games feature. These play out at the same bet level that launched the round and come with the same stacked wild feature to help players land some extra wins.

If 3 or more emblems appear in a single bonus game, an extra 10 spins are added on to the current round, and there is no upper limit to how many times this can happen.

This is a high variance slot, where players could see relatively long gaps between winning spins. The flip side of this is comparatively high prizes, topping out at an impressive 6666x the total stake. Overall, it has an average payback percentage of 96.155.

Stakes can be set from just 0.10 to 100.00 per spin, and it's fully optimised for PCs, smartphones, and tablet computers.

This is the third in a series of 5 Beat the Beast games from Oaklahoma-based Thunderkick, and joins Mighty Sphinx and Kraken's Lair in the range.