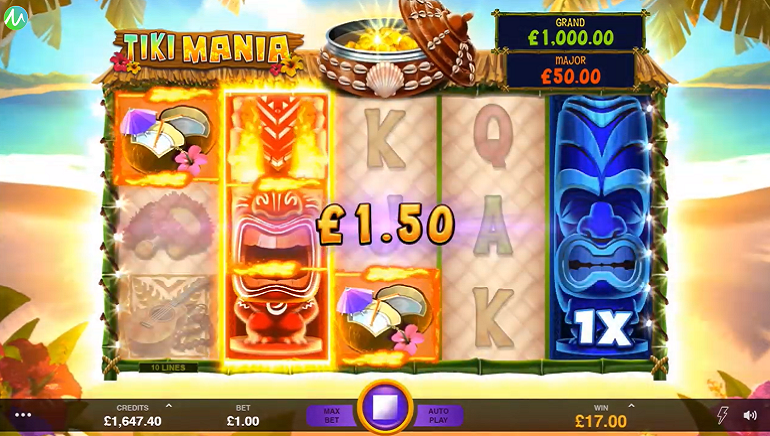 Prepare for a beach party at Microgaming casino, where users can play the new Tiki Mania slot on smartphone, tablet, or desktop.

Tiki Mania is a brand new video slot from Microgaming in which Tiki motifs run wild around a Hawaiian beach. The story is also notable for featuring a Hawaiian princess called Kaia, who has run away to the tropical island featured in the slot.

A colourful cartoon style has been laid over the top of a standard slot interface that is comprised of five reels by three rows. As a result, the Tiki Mania slot is capable of spinning and revealing 15 symbols after each turn. The symbols can then provide winnings if matched in combos of three or more, appearing from left to right across the 10 paylines.

Microgaming has programed Tiki Mania as a highly volatile slot with the potential for big winnings at scattered intervals. The crazy beach party atmosphere is then supported by familiar Hawaiian imagery, including drums, ukuleles, and cocktails served in coconuts.

Red Tiki Wilds are symbols that can burst into life if they land in any of the positions on the second or fourth reels. After coming to life, they can stack up and fill the whole reel while also yielding a re-spin.

When a re-spin is carried out, stacks of Nudging Multiplier Wilds will move around the reels for the chance to add multipliers of up to 3x. New re-spins will be added for every win that occurs when this feature is active.

A jackpot feature is also included and Red Tikis can land to add coins in each of the pots. These include multipliers that can provide either a 50x or 1,000x multiplier. Adding coins increases the chance of winning.

Princess Kaia appears as the scatter symbols, and she can unlock 10 free spins if players are able to land three scatters all at once. Red Tikis, Nudging Multipliers, and the Jackpot feature can all be unlocked during spins.