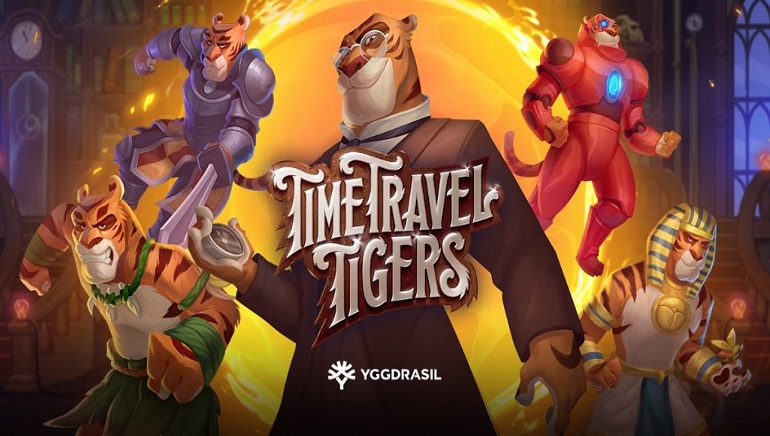 Time Travel Tigers is a new slot available exclusively to GVC casinos this November and designed by Yggdrasil Gaming.

Yggdrasil Gaming has released a new video slot that combines both tigers and time travel. From late-November 2018, the Time Travel Tigers slot will be exclusively playable to users who are signed up with iGaming brands owned by GVC Holdings. Some of the more prominent names include bwin, Coral, and Ladbrokes.

Jonas Strandman of Yggdrasil has described the creation of Time Travel Tigers as being a white-label partnership that is exclusive in nature. Strandman also revealed that the slot will feature what is described as a “transitional setting”.

Time Travel Tigers will be a story-driven experience featuring a cast of characters. Leading the show is Dr Tigerstein, who has been described in an Yggdrasil press release as being a scientific genius responsible for inventing a time machine. Dr Tigerstein will also be flanked by other characters who appear depending on the era.

The time machine element will allow for Yggdrasil to change up the experience for players, who could find themselves venturing through Ancient Egypt, Medieval Europe, or various others periods in history. In turn, the slot design, sound effects, and available features will vary depending on which era the player enters.

From a functional standpoint, Time Travel Tigers has been constructed as a slot with five reels and four rows. In terms of the potential for winning, Yggdrasil has elected to weave 25 paylines into the slot interface, with players given the chance of winning up to 1,000x times their bet.

As a slot, Time Travel Tigers has the capacity to change. Yggdrasil uses this in order to visit new time periods, but then incorporates those elements within the special features. For starters, there are four different types of free spins and multipliers, as determined by the current time period. At the same time, Time Travel Tigers will also present wild symbols.