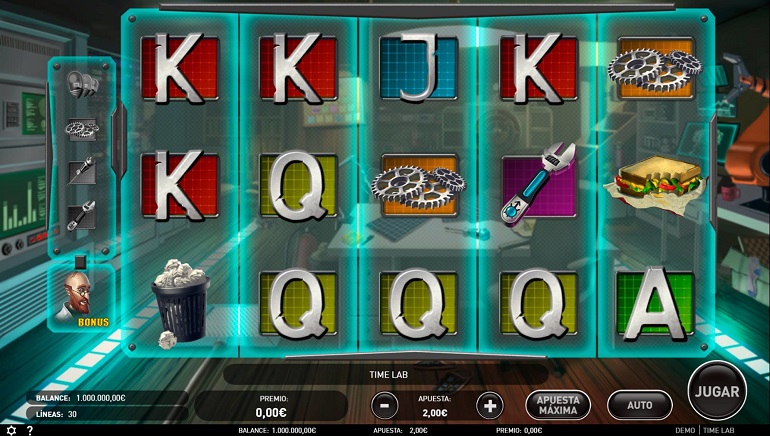 TimeLab slot is a nutty-professor-style slot game with a sci-fi twist! Players get to teleport through the time continuum, and it's totally surreal. This 5 x3 reel, 30 payline slot game is peppered with fun!

Anyone who's ever wondered what it may be like to travel through time might just have an answer with TimeLab slot from R. Franco Games. This interactive, zany adventure features a nutty professor and his time machine. With 5 spinning reels, 3 rows, 30 paylines, Wilds, Scatters, Multipliers, and Bonus Spins, TimeLab is one wild ride after another. Commercial director of R. Franco Digital, Mario Benito lauded the new game, and the infinite possibilities it brings to players.

Players can instantly teleport through different time zones at the click of a button. 3D visuals, and immersive animation make for a truly memorable gaming experience. Many useful symbols crop up along the way, including a wrench, a bin, a sandwich, popcorn, Jack, Queen, King, Ace symbols, and much more. The Wild symbol is represented by the hourglass. It substitutes for other basic symbols to form winning combinations. The Expanding Wild is represented by the machine-style symbol. It can expand to cover the entire reel and it will initiate complimentary re-spin features while it remains locked in place.

Of course, there is also Dr Random. This symbol appears on the second reel only and it expands to activate a Bonus Round which features multipliers. The Franky symbol can also expand and it appears on the fourth spinning reel. This game has a theoretical return to player of 94%, and it was just released for fans of sci-fi slots. Players get to join Dr. Random and R. Franco as they embark on the craziest adventures of their lives. Now that they’ve cracked the code of time travel, nothing stands in their way.