Tornadoes Strike With ‘Blown Away’ by Lightning Box Games 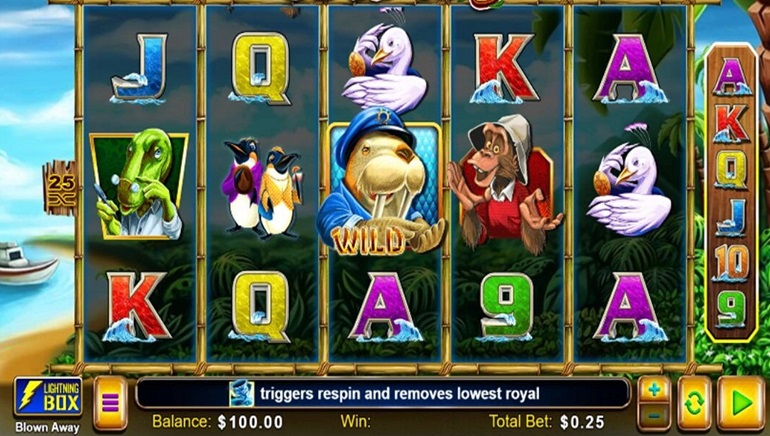 Blown Away is the latest whirlwind adventure from Lightning Box Games. This Tornado-themed thrill ride is laden with feature-rich elements and 3D animation. Sky Vegas will be first to host this slot machine game.

Blown Away slot game brings the elements of nature to life right before your eyes. This interactive online casino game features rough and ready Tornadoes cutting a swathe across the screen. Designed and developed by Lightning Box studio, this immersive slot machine game takes place aboard a fishing ship which has been tossed aside in the storm.

The crew aboard the fishing vessel includes a colorful cast of characters, led by the ornery walrus captain. The crew of scurvy knaves realize that the only way to get back on track is to score a few big wins. Excitement ramps up to fever pitch levels once the Tornado appears on the fifth reel of the game. The action sharpens as the lowest-ranking Royal symbol is removed from the game and players get to enjoy an additional re-spin in its place.

A Storm in a Teacup!

The Tornadoes continue replacing low-ranking Royals until there are none left on the 5 x 3 reel format. The Wild symbol is represented by the walrus, and it substitutes for other symbols to form winning combinations. The walrus can also increase payouts tremendously. When players land 3X Boat symbols, the Free Spin feature is triggered. This removes the Royal symbols from the screen for the duration of the Free Spins feature.

The multiplier symbol is represented by the cow. The potbellied creature with its brass bell and udders moves its way across the screen in an uproarious fashion, bringing lots of fanfare to the game. Blown Away slot machine game is exclusively available to Sky Vegas casino for a period of 2 weeks, starting on March 31, 2020. It will go into general release On April 15, 2020. The game creators are particularly fond of the Tornado re-spin feature which can increase player payouts up to 7X.