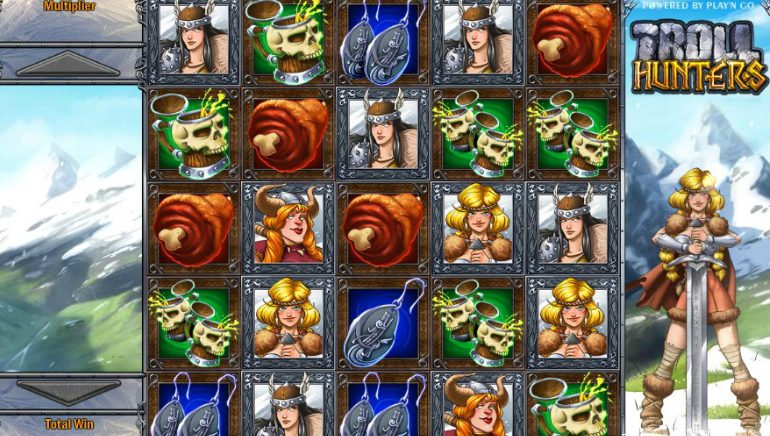 Play'n GO's new Troll Hunters slot will take you on a rugged adventure through the Scandinavian mountains with three heroines who won;t give up until the enemy trolls have been defeated.

Get ready to delve deep into Norse mythology with Play’n GO’s newest slot release, Troll Hunters, set in the snowy Scandinavian mountains. Troll Hunters will take you on a rugged adventure with the three female heroines, Liv, Siv and Ingeborg, who are out to clobber those trolls. The soundtrack of Play'n GO's latest creation is fantastic and both the base game and bonus round offer lots of winning opportunities.

Troll Hunters is a 5x5 grid with symbols including earrings, beer mugs, and a joint of meat. Wins are made up of three or more matching symbols, both vertically and horizontally, and the middle symbol in each winning combination becomes a Golden Rune Wild. When a winning combination is struck, the symbols disappear, causing an avalanche of new symbols to fall from above, which creates the potential for even more winning combinations.

Every time the winning symbols disappear and get replaced by new ones, players get more chances to win, as well as higher multipliers. If all 25 symbols are cleared from the grid, players receive a large reward, worthy of the mountainous trolls they are hunting.

The bonus game is triggered when the word "bonus" appears on the grid, and it can only do so once a winning combination has been hit. When an entire bonus reel is cleared, players are whisked off to a bonus free spins round, with 10 free spins up for grabs. The free spins can also be multiplied, depending on how many bonus columns have fully cleared.