Trolls Bridge Slot From Yggdrasil Crosses Over To More Casinos 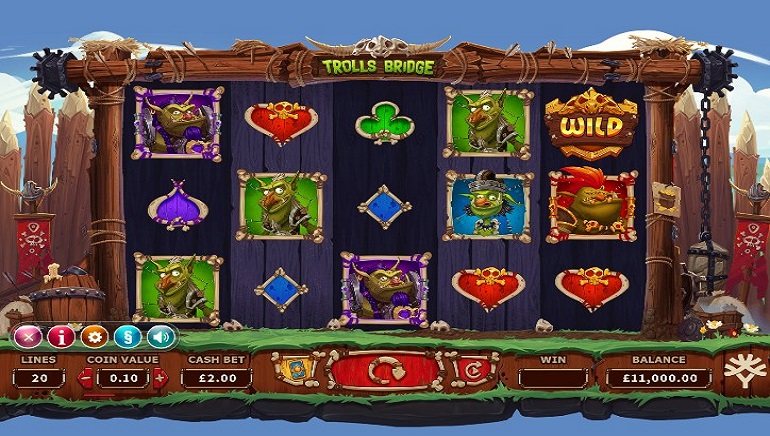 Trolls Bridge is an new slot from Yggdrasil that's set on a wooden drawbridge, where monster-sized prizes can be claimed during the multiple bonus rounds

After a successful period of exclusivity, Trolls Bridge is now launched across all online and mobile-compatible casinos that feature the Yggdrasil Gaming range. The cartoon-style graphics sets the action on a bridge, where the fearsome trolls actually pay out cash rather than eating people or demanding a fee for crossing.

This is a 5-reel, 20-line slot that can be played from just 0.20 per spin. An optional Golden Bet raises the minimum stake to 0.25, which boosts the return to player percentage with a richer free spins round.

The stunning animations will reveal the four trolls who pay out the top prizes, while lower-value wins come from landing the playing card suits across a line from the left side. Up to 250x the stake is paid out by the most valuable troll.

Cross Over To The Bonus Features

Four wild symbols can appear, with regular wilds, sticky, random and troll wilds all landing in any spin. Players should look out for the Bonus Pot, which only appears on the right-side reel, but triggers a feature each time its seen. Win multipliers that can be worth up to 1,000 coins and a selection of free spins with extra features can all be claimed.

The path to free spins can also include a pick a card round. Extra spins, multipliers and special wild features will be found in each card that's selected, turning this into a potentially lucrative feature.

Yggdrasil Head of Slots, Jonas Strandman, said: “What makes this game stand out is the great combination of simple fun and great wins – the goofy characters run amok on the reels, but can also hit you with a win 2000 times your bet size.''

“We always knew Trolls Bridge would be a hit, and since launching, its performance has confirmed our predictions. Thanks to its success it gives us great pleasure to be able to offer the game to all our clients so even more players can enjoy this crowd favourite!”