Turn Up The Volume With The New Mild Rockers Slot Game 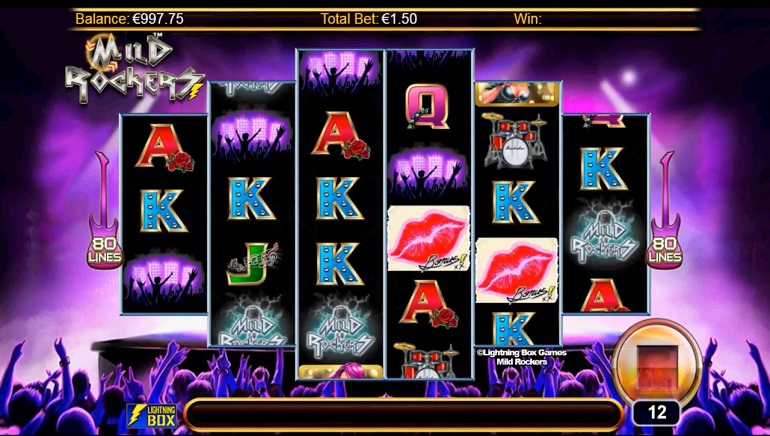 Mild Rockers is a new slot from Lightning Box Games that follows a heavy metal band at a concert and comes with some bonus features to rock out with.

Online casino players who like a bit of old-school heavy metal will want to spin the reels of Mild Rockers, a new slot machine from Lightning Box Games that has enough long-haired guitarists and buxom, leather-clad singers to keep any fan of the genre happy.

Rockin' Out With Mild Rockers

The game takes place at a concert venue, with an eager crowd cheering the band on from the mosh-pit. Although there's 6 reels to Mild Rockers, they are laid out in an unusual pattern, with the 2 outer ones each having 3 symbols on them, the next 2 in being 4 symbols high and the middle reels containing 5 symbols each, while 80 paylines run across them.

Low value playing card symbols are given a rock and roll makeover with metal studs or roses, while higher winlines are created by symbols of the crowd, keyboards, drum kit and guitarist. There's an important Mild Rockers symbol in the mix as well, while the purple-hair lead singer is a wild symbol, so she can act as others to complete extra winning combinations.

Keep On Rocking In The Bonus Games

Bright red lips, puckered up for a kiss, will trigger the main Encore Bonus feature when landing in any 3 or more places at once. During the resulting free spins, the Mild Rockers symbol turns into a Wild Rockers logo, substituting for others and hopefully making it easier to land some wins in the bonus games.

A special '+1' kiss will add an extra Encore spin with each appearance. Several can be accumulated in the normal bonus spins, and will play out at the end, with golden stacked Wild Rockers symbols on the reels, turning this into a full-on finale.

Based in Sydney, Australia, Lightning Box Games has been providing slots for land based, online and mobile casinos for over 10 years. Mild Rockers is just the latest in their series of slot machines that come with unique features and innovative gameplay.