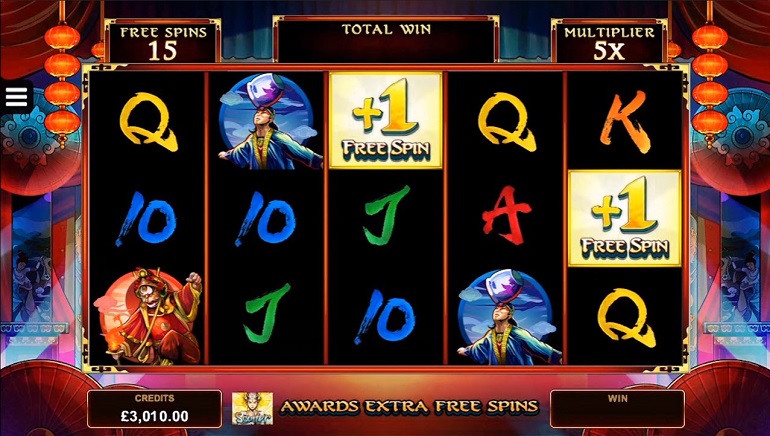 Two brand new slot games are being released from Microgaming: Six Acrobats and Sugar Parade. As you might expect from Microgaming, these slots each have their own unique theme, crisp and clear graphics, and lots of winning potential.

Six Acrobats is a 5-reel, 3-row, 9-payline slot machine that will make players feel as if they are in the middle of a Chinese circus. It is a medium volatility slot with an RTP of 96.5% and bets range from .9p to 22£, and coin sizes range from .01 to .5.

Slot symbols include Chinese acrobats, which are the high-value symbols, as well as letters and numbers in Chinese-style writing. The scatter symbol is Guanyin, the Golden Queen. The wild symbol is the slots’ logo, and it substitutes for all symbols, except the scatter. In the base game, any win that is made using a wild is subject to a 5x multiplier!

Microgaming has loaded up Six Acrobats with an awesome Free Spins feature in which players can not only win free spins, but they can also have their winnings multiplied by up to 25x. With this 25x multiplier, players can actually win up to 4333 times their original stake in just one spin!

Every scatter that lands on the reels in the Free Spins feature will award one extra spin and every winning combination in this round will get a 5x multiplier. But that’s not all - any win made with at least one wild will get a ginormous x25 multiplier!

Sugar Parade is an entirely different slot than Six Acrobats - lighter-themed and with animated treats - it is sure to give you a hankering for some sweets. The graphics in this game are more cartoon-like than lifelike, but that’s the point.

As you would expect from a game named Sugar Parade, the reels symbols feature all sorts of sugary sweets, including animated ice cream, candies, cupcakes with frosting, and more. These are the high-value symbols on the reels, while the low-value symbols are regular old letters. The ice cream is the scatter symbol and the crowned cake acts as a bonus symbol.

Sugar Parade also has a Free Spins feature, which is triggered when three or more scatters land on the reels simultaneously. When this feature is triggered, players automatically get 10 free spins, and every winning combination is treated to a 3x multiplier. The feature can be retriggered when three or more scatters land during one of the free spins. With the multiplier and the ability to retrigger the round, players can win a whopping 1658x their original stake - now that’s what we call sweet!