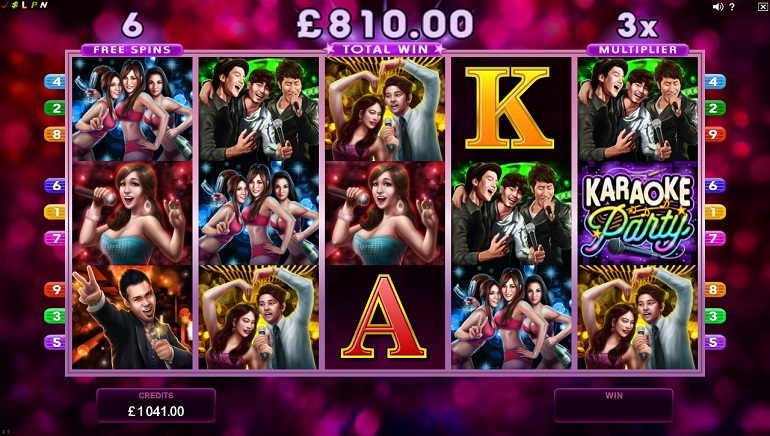 All Slots Casino have announced the release of two new slots games, and their first Keno launch for some time.

All Slots Casino usually release a number of games each month, and this one is no exception with three new titles from Rabcat and Microgaming added to their collection. The new Frozen Diamonds and Karaoke Party slots, and Monkey Keno are being made available to play at All Slots Casino from August 9th.

Frozen Diamonds comes from the Rabcat developer and features an unusual format to its' 5 reels and 20 paylines, with no conventional reels and symbols of various jewels encased in ice dropping down from above with each spin. Any that make up a winning combination will disappear to leave spaces for new ones to drop into, potentially creating a new win and repeating the process. If three consecutive wins occur this way, a free spins round with extra wilds and the chance of additional spins is triggered.

Karaoke Party is the latest Microgaming slot and has colourful images of people singing on a night out across the 5 reels and 9 paylines. The main feature is a free spins game, with 15 commencing when at least 3 scatter symbols land at once. During this round, all wins are tripled in value, while an optional gamble game can see winnings multiplied several times over. Wild multipliers are also featured, with 2x the base value of a win paid out when the wild symbol completes a line.

Monkey Keno is played out on a board of 80 numbers, with players selecting up to 15 of them, after which a monkey will throw coconuts at 20 random spots. Winnings are determined by how many of the players' picks are matched with those numbers hit by coconuts, with dancing monkeys celebrating any prize payouts. Up to 10,000 times the bet amount can be won for matching all picks. Monkey Keno is another release from Microgaming.