Two Players Hit Fugaso Mini Jackpots the Same Day to the Tune of €221,000 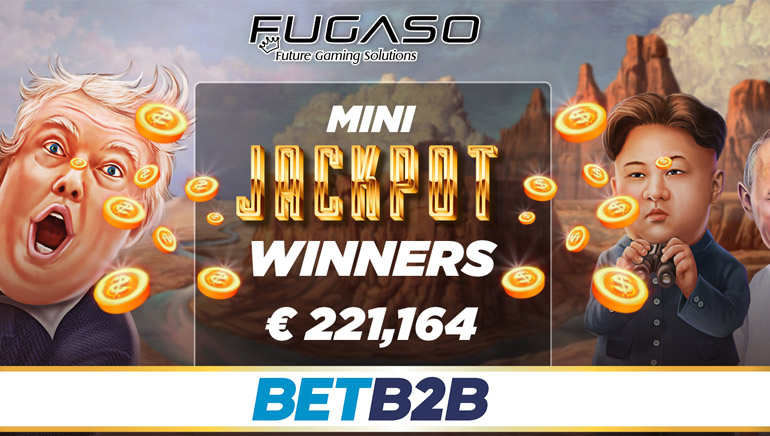 Two lucky players managed to score Fugaso's Mini jackpots within the same hour, with the first winner banking over €200,000 and the second one taking home just shy of €20,000.

Fugaso's popular slots Trump It Deluxe and Book of Tattoo, both of which are a part of the company's progressive jackpot network, brought luck to not one but to two players on BETB2B brands who managed to hit the Mini jackpot the same day for a combined total of €221,164. Both wins happened within the same hour.

Fugaso has built a fairly large network of progressive jackpot machines, attracting a lot of attention from the players. Thanks to company's numerous content supply agreements, games such as Book of Tatoo and Trump It Deluxe are now available for play across many popular sites.

All games within the jackpot network feature a shared progressive pool and players have a chance to score one of three jackpots, Mini, Midi, and Maxi on every spin. Jackpot spins are triggered randomly, which is why it is possible for two players to win the same jackpot on the same day. Still, it's not something we see every day.

The Fugaso progressive network uses a model similar to that of other gaming companies. Each jackpot grows over time with every spin played on any casino featuring any of the jackpot games. So, at the time when the first lucky player got their win, this number was quite large, standing at €201,168.

After the win, the Mini jackpot counter was reset so the second winner, who caught their lucky spin about half an hour later, claimed the win of €19,996. While this may seem small in comparison to the first hit, it's still a very nice score and another solid indicator that jackpots on Fugaso games are truly random.

In addition to the two titles that brought luck to the players this time around, Fugaso features many more slots in their progressive network, covering a wide array of themes and game mechanics. Some of the more popular slots from the Jackpot Series include Clash of Gods, The Mummy 2018, and Cosa Nostra.