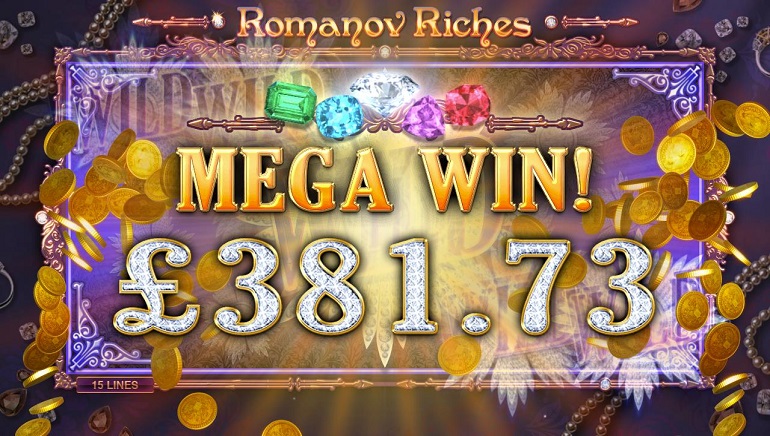 Based on the fabled wealth of the famous Russian dynasty, Romanov Riches is a new Microgaming slot packed with entertaining and innovative features and bonuses.

Microgaming has come up with another slot that is likely to appeal to history buffs. This time around, it is Romanov Riches, a game developed by Fortune Factory Studios, a development studio creating exclusive titles for the gaming giant, commemorating the famous Romanov dynasty of Russian rulers.

Colorful Gems Stacked on the Reels

Romanov Riches is a 5-reel, 15-payline slot featuring regular playing card symbols and various colorful precious stones such as rubies, sapphires, and emeralds on the reels. All symbols are stacked, which significantly improves winning opportunities on every spin.

Landing at least two full stacks of the same symbol from left to right will pay the appropriate win and initiate a free re-spin. If another full stack lands on the adjacent reel, wins are paid and another re-spin is awarded. This way, players can get a full screen of the same symbol, paying all 15 lines.

Up to Three Bonus Wheels

Apart from the base game hits, the Romanov Riches slot also comes with a bonus feature that can award one, two, or three bonus reels. To get the bonus, players need to land at least three full stacks of bonus symbols on the first three reels. Like with other symbols, landing just two full stacks will initiate a re-spin, and every time another full stack lands on the adjacent reel, another re-spin is awarded.

If all five reels of bonus symbols land, players are awarded three spins on three separate bonus wheels. On the first wheel, prizes range from 2x to 25x the bet. On the second reel, players can score between 3x and 75x their total bet. The two amounts won from both reels are added together.

On the final reel, there are multipliers applied to the total win, ranging from 2x to 10x, meaning the bonus feature can pay up to 1,000 times the bet.

With engaging and innovative features as well as a solid potential for some big wins, Microgaming and Fortune Factory Studios' developers expect Romanov Riches will capture the attention of the players and offer them a glimpse of what the developer has in the pipeline for the future.