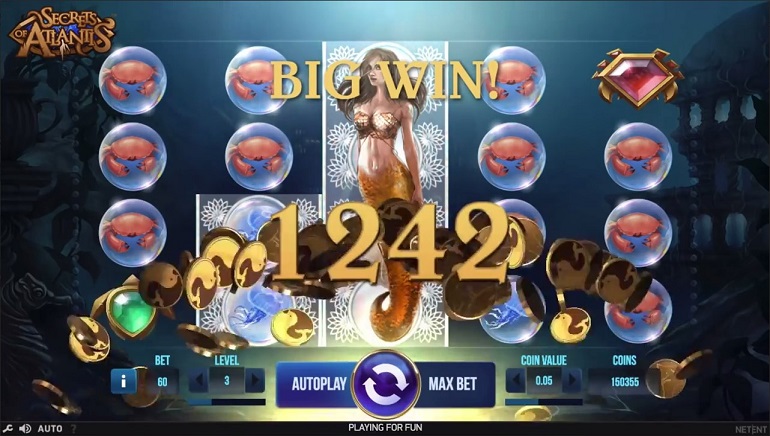 New Secrets of Atlantis slot by NetEnt brings the mysteries of the ancient kingdom of Atlantis straight to our homes.

The lost world of Atlantis has been capturing the imagination of many explorers and myth lovers around the globe for centuries. There were numerous attempts at finding the lost treasures of this mystical place but, so far, they've all been unsuccessful.

For those not as adventurous as to go out and look for it, NetEnt came up with the Secrets of Atlantis slot, bringing Atlantis straight to our homes.

Drawing on the idea of Plato's Atlantis, the powerful and highly advanced kingdom which was allegedly lost under the sea, Secrets of Atlantis is a 5-reel slot with 40 paylines. The symbols you will encounter include mermaids, jellyfish, clamps, and precious stones.

Although there isn't a traditional free spins feature, this new NetEnt's slot does offer players a chance to win big via Nudge Wild and Colossal Symbol features. The Mermaid symbol is wild and stacked on the reels. When a small piece of the Mermaid appears on any of the reels, it will be nudged up or down to cover the entire reel.

The Colossal Symbol will fill up the middle three reels when activated and will act as a wild for that symbol type. If the full Colossal Symbol is highlighted, it will trigger an additional re-spin. If symbols line up just right, Secrets of Atlantis slot can pay up to 1,600 the stake.

The new slot by NetEnt, which should be available at casinos powered by the software like LuckyStar Casino, 777 Casino, and Real Deal Bet Casino, will fully immerse you into the atmosphere of the submerged world of Atlantis. Set in the under the sea environment and with symbols you'd expect to find if Atlantis were ever discovered, this slot provides a thoroughly enjoyable atmosphere.

Sounds and music follow the main theme along nicely, as they are relaxing and mysterious at the same time. While the theme melody is pacifying, it carries a note of uncertainty, always keeping you on your toes.