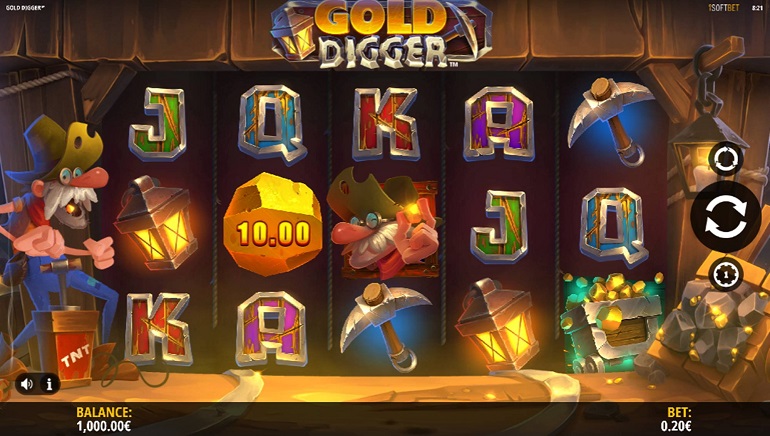 Gold Digger is a new slot from iSoftbet that's themed around gold mining. Join Gus the Prospector, as he digs up win multipliers, respins, and extra rows of symbols.

The new Gold Digger slot from iSoftbet follows the adventures of a grizzled prospector named Gus, as he digs up winning combinations across 5 reels and 20 lines.

Gold Digger is bursting at the seams with features, including reel respins with win multipliers, wild substitutions, and symbol transformations. Players can strike gold with wins of up to 8,230x their stakes.

This is a fun, cartoon-style game, hosted by Gus, who stands to the side of the reels waiting to blast open some bonus features. Playing card symbols join a minecart, lamp, pickaxe, and nuggets of gold on the reels. An explosive wild symbol acts as others, while the gold launches a respins round when seen in any 5 or more places.

Those nuggets reveal win multipliers, then lock in place as the rest of the reels respin 3 more times. Any more nugget symbols also stick to the reels and reset the spin counter back to 3. Reel boosters can help during this Gold Link round. Players collect gems, with any 3 of a kind activating a modifier feature.

Blue gems add up to 3 extra rows of symbols, while green ones increase the value of gold nuggets. The red gems will add further respins to the total, and purple gemstones increase a multiplier level.

Gus can throw dynamite at the reels at any time, turning extra symbols wild, while the pickaxe can transform symbols into gold nuggets. The plunger turns low value playing card symbols into higher paying picture icons.

Gold Digger is a mobile-compatible game that can be played for between 0.20 and 20.00 per spin.

Mark Claxton, Head of Games at iSoftBet, said: “Gold Digger is one of the most eagerly anticipated additions to the iSoftBet slot portfolio so far this year. With Gold Diggin’ Gus on hand to help players in their search for riches, he will be a welcome sight whenever he springs into action.