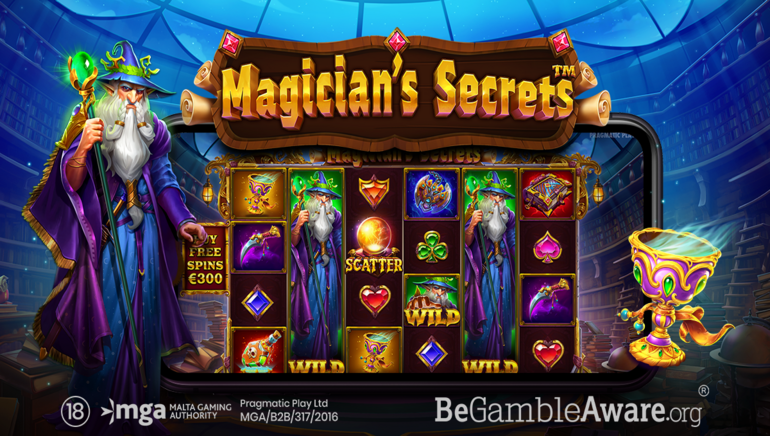 Magician’s Secrets is the latest game from Pragmatic Play, a slot with two amazing bonus rounds and wild symbols that make a huge impact.

Pragmatic Play provided countless opportunities for slots fans to have fun in 2021. The software developer released dozens of games last year and plans on maintaining the high tempo in 2022 and beyond. For the time being, those who enjoy the slots produced by them should check out Magician’s Secrets. This is a brand-new game with a unique theme and immersive game mechanics, not to mention the 4096 ways to win. These are all solid reasons to give the slot a chance and spin its reels.

Kick-Off the New Year with a Magical Slot

Pragmatic Play wasted no time and released the first game in 2022 on January 7. Players are invited to spin the reels of Magician’s Secrets™ a game with 4096 winning ways and some amazing features. The mesmerizing visuals catch the eye of prospective players, while the solid game mechanics keep them hungry for more. Veteran players will love the expanding wild feature which is randomly triggered to multiply winnings by up to 10 times the bet.

Wild symbols do their part by replacing other items on the reels to create winning combinations. As for the scatter, it will act as a gateway to the bonus round if players can find at least three of them across the reels. The best part is that Magician’s Secrets™ has not one but two bonus rounds, so players have even more winning opportunities. Players who discover six premium symbols can win up to 100 times the stakes, with the Magician’s Wild helping complete these winning combinations.

The Expanding Wilds Bonus Round is responsible for producing 10 free spins which can be re-triggered. During the free spins, players benefit from a multiplier that increases with every new round. This paves the way to bigger winnings and makes this one of the most exciting features in the game. Speaking of which, the Sticky Wilds Bonus Round is also amazing as it awards eight free spins. When players fill a reel with a pre-selected Sticky Wild symbol they get an additional three spins.

Magician’s Secrets™ is the latest and most exciting slot from the software developer. Its lineup of games is already impressive and players can try more than 200 games. Crystal Caverns Megaways™, Smugglers Cove™, and Christmas Big Bass Bonanza™ are some of their award-winning games. Yossi Barzely, their Chief Business Development Officer suggested that this is just a taste of what 2022 promises to deliver. Many more games of the same caliber are expected to be released over the next 12 months.