Victory is Nigh with Spartan Fire from Lightning Box 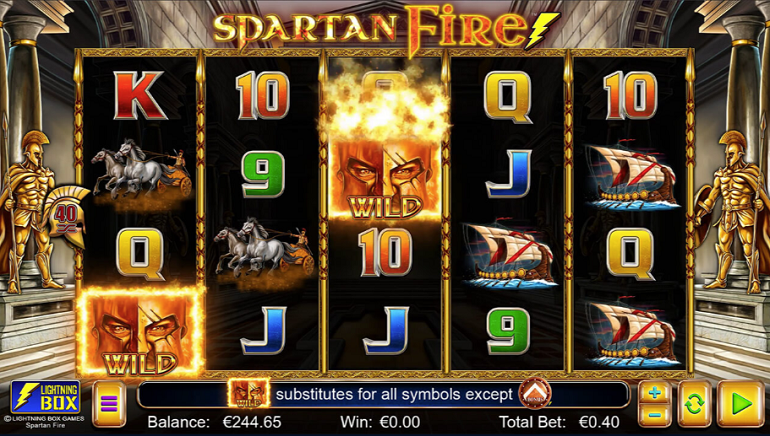 Spartan Fire slot from Lightning Box is furnace-forged to deliver sizzling-hot entertainment to players in search of mega-money wins, and action-packed game play!

Spartans Dominate As the Fiercest Warriors of All Time

Ever since the movie 300 was released, global fascination with Spartans has gone through the roof. Spartan Fire by Lightning Box delivers bolus after bolus of adrenaline-loaded slots sessions for players. This game is truly a battle royale of epic proportions. Featuring a 4 x 5 reel format, this slot game brings 40 paylines into play as fans battle it out for mega-money paydays.

The Spartan Fire Wild symbol is represented by Wild Eyes. These substitute for other symbols to form winning combinations. While the Spartan Spin feature is in play, the male and female symbols are transformed into Wild symbols, for much bigger paydays. When players land 3+ Spartan Shield symbols on the reels, the Spartan Fire Bonus round kicks into high gear. At this point, you get to select your  shield and fight for the glory of Sparta.

Plenty of in-Game Features to Entertain the Masses

Every shield features a Unique Symbol, Multipliers, Extra Games, and Wilds. It is possible for players to lock in 9 free games with a 30 X multiplier in effect. The game is being released through the SG Digital Platform, but was initially the exclusive domain of Kindred for 2 weeks. The co-founder and CEO of Lightning Box, Peter Causley had this to say about the game’s release: ‘… Spartans are famed for battling to great victories and players will experience all the thrills of war in our newest hit, Spartan Fire.’