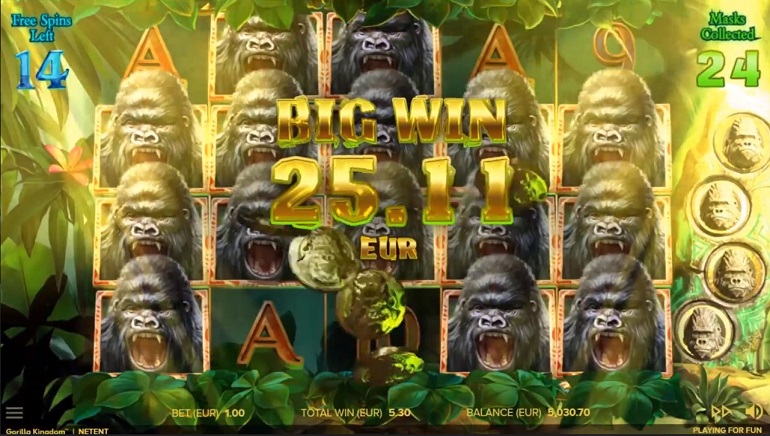 Adding the latest NetEnt release to their ever-growing gaming portfolio, Videoslots Casino has reached an important milestone, bringing their total number of games to 4,000.

Videoslots, one of the best-known online casinos around, has just hit an important landmark. Namely, with the launch of NetEnt's latest release Gorilla Kingdom on their platform, the casino has reached an impressive number of 4,000 titles in their gaming library.

From Strength to Strength

Launched in 2011, Videoslots Casino has always focused on building a game-rich environment for its players. Constantly adding new titles and creating new partnership, the operator has managed to stay true to its original idea over the years, becoming one of the most versatile gambling sites around.

The casino hasn't just been leading the way in terms of sheer number of games. They have always been very fast to add new releases from top suppliers such as NetEnt. The new Gorilla Kingdom slot has just been released and it's already available for play on Videoslots. The fact that this game also happens to bring the operator to the impressive 4,000 landmark is an added bonus.

Always on the Lookout for New Partners

To build such an impressive library of games, Videoslots has had to create good business relationships with many game developers around the world. Always looking for new opportunities to make their offering more colorful, the operator has partnered up with dozens of different studios over the years.

Although their business philosophy is to offer as many games as possible, the casino still takes great care to only include quality suppliers whose titles have been properly tested, licensed, and verified  by reputable third parties.

Today, there is hardly a slot worth mentioning one can't find at Videoslots Casino. And, although there are now 4,000 games now available to the players, it's unlikely the casino will rest on its laurels. In the weeks and months to come, Videoslots will certainly continue to expand its library with titles from their numerous existing partners and they are likely to forge some new partnership moving forward as well.