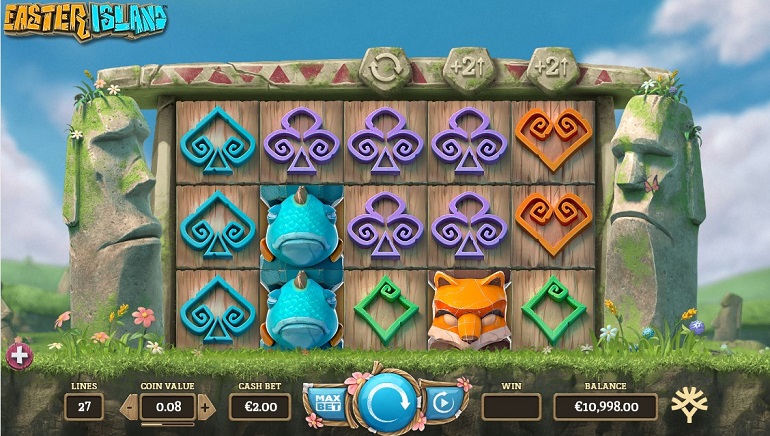 Find out where you can get early access to the brand new Easter Island slot that is coming soon to Yggdrasil casinos.

Yggdrasil Gaming is the studio behind recent hit slot releases Gem Rocks and Ozwin’s Jackpots. Next up is a video slot that will transport players to a historic island in the Pacific Ocean. Easter Island is scheduled for a full release on 22 March 2018, but some Yggdrasil casinos already have the brand new slot, which is playable now at PlayOJO Casino and Slots Magic Casino.

Easter Island is famous for the 887 moai statues that populate the stunning World Heritage Site. Two moai statues appear in the Easter Island slot and even serve to welcome players to the game. The statues flank a slot interface that is made with five reels and three rows. They will react positively when players are able to create winnings on the 27 paylines.

Yggdrasil has included the Symbol Swap Respin feature. This works by replacing all of the low pay symbols for a re-spin after players win from a low pay symbol – the same is also possible for the high pay symbols.

Easter Island also has a special feature that could see the reels expand. After matching four symbols, players will get a re-spin on a five-by-five grid of symbols. If they can match five symbols, then the interface will become a five-by-seven grid for one re-spin. This means Easter Island starts on 27 paylines, but can briefly rise to 65 or 103.

The slot also has expanding wild symbols that can become activated on reels two and four. When a wild symbol lands on a winning spin, they will expand to become sticky over the entire reel.

Full specifications have also been revealed prior to the widespread release of Easter Island. At a glance, the slot will offer 16:9 resolution on desktop and compatible mobile devices, which can include Android and iOS on the web browsers of Chrome or Firefox.