Voicing Political Views via Casino Slots: Why Not? 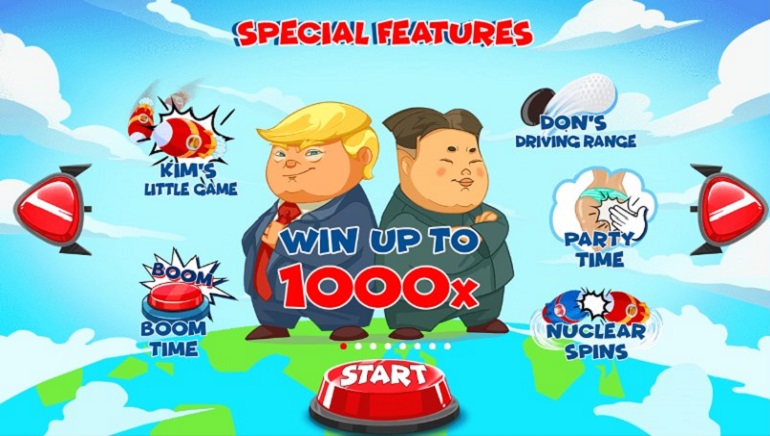 Ever since we've become a modern society where people are entitled to form their political opinions and positions (without being beheaded for it), certain groups have used various means to vocalize the said opinions and express their criticism. And, while the online gambling industry hasn't actually been the leader on that particular front, we've witnessed a few slots influenced by the global politics recently and it is definitely refreshing to see casino game makers aren't afraid of a bit of controversy.

These games can certainly be seen as the critique of the modern establishment although they do it in a hilarious way, which means players also get a lot of entertainment value out of it as well.

The Rocket Men slot by Red Tiger Gaming was released relatively recently and by the title of the game you'd have a hard time guessing what it is about. However, the moment you start spinning the reels, it all comes together as the features two big "rocket men" of our time - North Korea's Kim Jong-un and the current President of the United States Donald Trump.

The game revolves around the conflict between the two leaders who seem to absolutely love their nuclear arsenals and never miss a chance to bring them up. With funny, military-like music playing in the background and war-like symbols like warrior ducks, Rocket Men comes with several entertaining features like Nuclear Spins, Don's Driving Range, Kim's Little Game, and Boom Time, where you'll get to fire away some missiles.

Trump It by Fugaso

Another game with a title that can be somewhat misleading, Fugaso’s Trump It is a slot entirely about the global politics. On the reels, you'll find many well-known politicians such as Donald Trump, Barrack Obama, Vladimir Putin, Hillary Clinton, etc. The game itself is fairly simple as it doesn't have as many special features as Rocket Men, but it does have flashy graphics and funny music accompanying the gameplay, which should be enough to keep you entertained for a little while.

Betsense may not be the biggest game developer in the industry but there is no denying their Dictator slot is something else. Betsense developers figured it would be a good idea to gather the world's greatest current and past dictators in a single slot and they've made it work.

If you know your dictators, you probably know what to expect on the reels, as the game features the likes of Mussolini, Hitler, Mao Zedong, Napoleon, Castro, Kim Jong-un, and others from the merry bunch.

Aside from its entertaining theme, the base game isn't particularly exciting, which is probably why the Dictator slot has gone somewhat unnoticed. However, it is worth giving a try for the bonus feature alone, where you'll get to grab a sniper rifle and take dictators out one by one. Afterwards, have some fun launching nuclear missiles at those pesky North Korean neighbors.