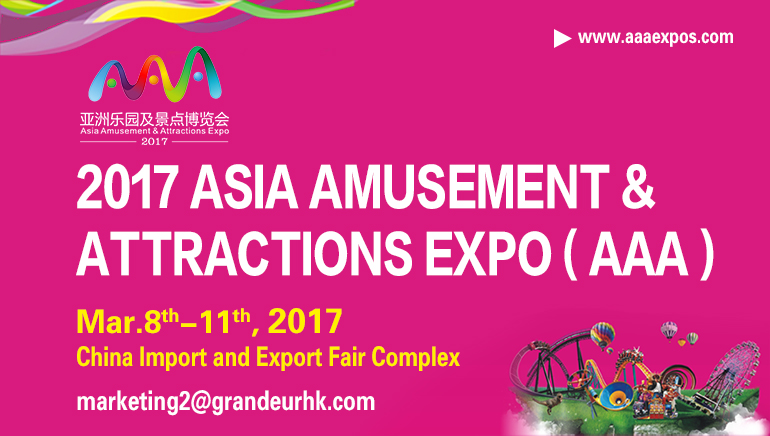 Asia’s leading Theme park and VR leaders will exhibit on a massive floor to a global audience of professionals.

The Asia Amusement & Attractions Expo is set to showcase VR tech but offer so much more.

Taking place from March 8th to 11th, 2017, at the China Import & Export Fair Complex, AAA 2017 is preparing for a boom in the Chinese VR market over the next five years.

Studies estimate host country China to be the biggest VR market in the world, with 286 million potential users. Of the 6.3 million virtual reality (VR) headsets shipped worldwide in 2016, 40 percent will be sent to China. By 2020, the scale of China’s VR market will reach 55 billion RMB.

To prepare, AAA 2017 is offering insights into developing the key components of today’s VR industry in China to keep up. Core technology, quality contents, and technological professionals in the incoming China VR market will all be among key topics addressed, developed and enhanced at AAA 2017.

As one of the leading amusement and attraction exhibitions in Asia, AAA is a product of the integration of specialization, combing CIAE (China Guangzhou Int'l Game & Amusement Exhibition) and TPAE (China Guangzhou Int’l Theme Parks & Attractions Industry Exhibition), AAA 2017 will feature a new exhibition hall dedicated to the display of the latest VR technology, much of which is set to debut on the AAA 2017 exhibition floor.

The Rise of VR

Virtual reality will have a more prominent place than ever before among the theme parks, games, amusement, and attractions commonly associated with and promoted by AAA.

Those expected to enjoy the epic presentations of AAA 2017 include a full slate of Asian entertainment industry professionals as well as guests from other global sectors such as America, France, Germany, Italy, Korea, Switzerland, Belgium, Turkey, India, Argentina, and Dubai.

The massive array of exhibitions is AAA’s key as a trade convention: 2016’s edition saw featured 3,000 booths featured by over 400 exhibitors. Surveys following the 2016 edition revealed some 80% of exhibitors achieved agent/distributor agreements, with 70% of exhibitors rebooking for the 2017 version.

AAA 2017 is expected to be better than ever, with the best of not only VR but land-based innovative new theme park offerings set to display infinite variety and surprises among the industry’s latest products and technologies.

The emergence of VR remains the key enhancement of this year’s show, with AAA showcasing a number of VR companies: leaders such as Leke VR, 9D, Zhuoyuan Group, Changlai, Mantong Electric Technology and more are preparing to exhibit their latest products on what promises to be a truly mind-blowing exhibition floor.

With a dizzying array of technologies on the massive expo floor; the emergence of VR; and the wide array of international guests, the benefits are there for all iGaming professionals who attend, no matter what their specialisation or experience level.

Microgaming's VR Roulette: A Glimpse Into the Future