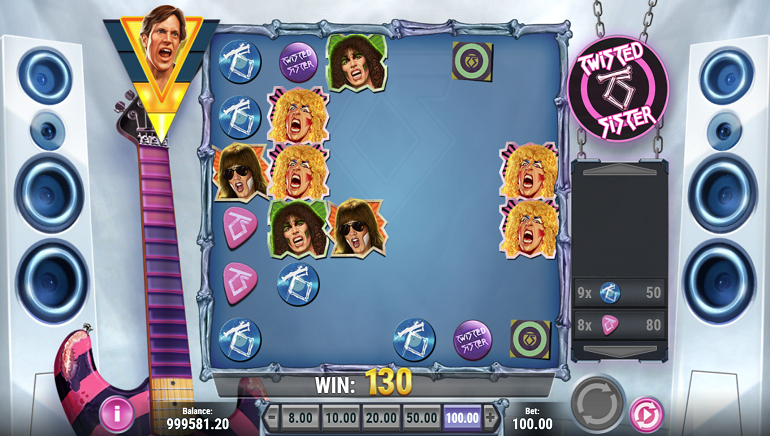 Play’n GO has raised the volume to 11 with the release of a feature-fuelled video slot based on the American heavy metal band Twisted Sister.

Music fans have been able to play a variety of rock and heavy metal-inspired slots from Play’n GO, including more recent options like Annihilator and Testament. Thus far, Play’n GO has chosen to feature niche acts, but that has all changed with the unveiling of a video slot based on the legendary Twisted Sister.

Fronted by Dee Snider, Twisted Sister crashed onto the scene in 1972 and thrived during the 1980s with the emergence of music videos. In Play’n GO’s six-reel Twisted Sister slot, users can listen to hit tracks “We’re Not Gonna Take It” and “I Wanna Rock” while playing what is technically described as a 6x6 cascading grid-slot.

Twisted Sister’s famous band members feature in the slot as the more valuable symbols, while a selection of merchandise will appear as the normal symbols. Each of these base-game symbols can be substituted whenever a wild symbol appears.

Wild scatters have also been included and can trigger the We’re Not Gonna Take It feature once four have been added to the scatter collector. A free round then begins and a 2x2 Mega Symbol appears and rampages across the screen until reaching other wild scatters. Any symbols that disappear will get replaced due to the cascading feature.

During play, the band members can charge up a meter when they deliver a win. When five charges are added, the meter will randomly award one of the five features available. We’re Not Gonna Take It is one of the possible outcomes alongside four new options that also carry rewards.

With Scream, this unleashes a soundwave to blow up all low-value symbols and introduce a cascade of new symbols. Additionally, Go Wild can select a symbol to act as a wild, Unite transforms band members into one symbol, and Dad Gets Angry releases two wild scatters with a non-winning spin.