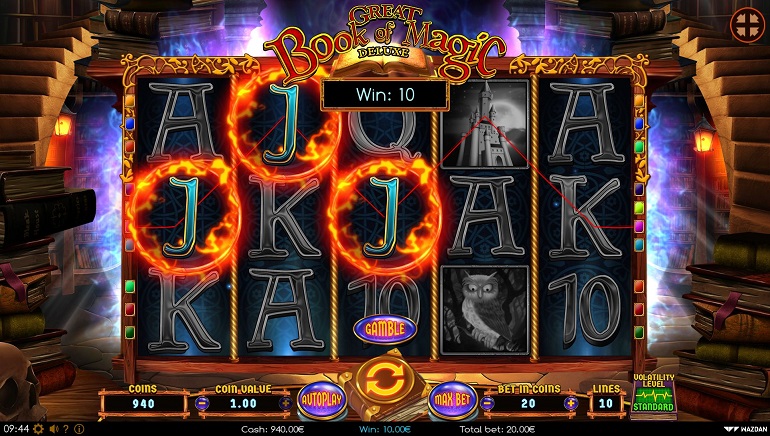 Great Book of Magic Deluxe is another new slot from Wazdan. The Maltese developer showcased this and other slots at ICE Totally Gaming 2018.

ICE Totally Gaming is the annual conference where many gambling operators and software developers choose to unveil their upcoming plans. As of February 2018, Wazdan is the very latest software developer to showcase a slew of new slot games, not to mention a freshly acquired licence from the UK Gambling Commission (UKGC).

Great Book of Magic Deluxe was the main slot to be highlighted by Wazdan, which is a software developer situated in Malta. In the slot, Wazdan has captured attention by providing a Volatility Control feature. This allows gamers to adjust the volatility based on their preferred playing style.

The least risky is to select low volatility, which generates frequent winnings, but these are smaller than what is potentially achievable at high volatility. At this level, the winnings do not occur quite so often, but they can climb to greater values. In the middle is a normal volatility for players who would rather a balance between low and high.

The five-reel slot can also trigger 10 free spins when players manage to catch three scatter symbols on the same spin. At this point, the slot will reveal a bonus symbol where the Great Book of Magic shall turn over pages and cover one reel completely. Winnings can also be risked for double the gains in a separate bonus game.

Wazdan is a period of expansion, as evidenced by the securing of a UKGC licence. The release of Great Book of Magic Deluxe shows further ambition, but there were plenty of other recently released slots to exhibit at ICE 2018.

For the most part, Wazdan has released one new game per month, with previous titles including Haunted Hospital, Dracula’s Castle, and High School Manga. Meanwhile, the future titles are slated to include Captain Flynt, Mayan Ritual, and Los Muertos as the frontrunners. Players can play Great Book of Magic Deluxe at Wazdan powered online casinos.