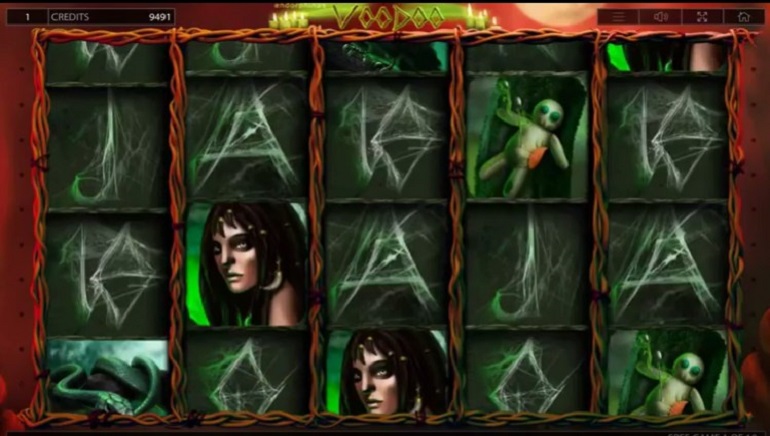 Voodoo is the latest new video slot to enjoy at Endorphina casinos, where players can embark on a spooky journey to unlock thousands in their winnings.

The holiday season is a time for bright colours and festive imagery, but Endorphina has released a brand new video slot that will give players an edgier experience. Simply titled Voodoo, this is an eerie video slot that is filled with spooky imagery for players to explore throughout their experience.

At first glance, Voodoo immediately stands out as appealing for fans of horror movies and games. The high value playing card symbols are aggressively etched out in chalk on blackboards, while a cast of creepy characters appear as the most important symbols.

Looking around the screen, there are other spooky elements to take in, with the green background being the most obvious. However, it is also worth highlighting the skulls on spikes and the flickering candles that are placed on either side of the Voodoo logo. From a visual perspective, Voodoo makes a strong case for being a good horror slot.

The technical impressions also matter, with voodoo using five reels and three symbols to give players the industry standard of video slot designs. In this area, the next obvious design choice has been Endorphina’s decision to use only 10 paylines, which suggests affordability for players who want tighter control of their bankrolls.

Voodoo also seems to be a rewarding slot if players can match up the scariest of the symbols. For example, there are 10,000x, 5,000x, and 2,500x multipliers for the most important symbols in the base game.

In the special features, Voodoo plays it safe by including wild symbols, but there is more to unlock in this area. For instance, players can get 10 free spins by landing three or more scatter symbols on the five reels.

For any players wishing to seek out the new Voodoo slot, they can find it now at their favourite Endorphina casinos.