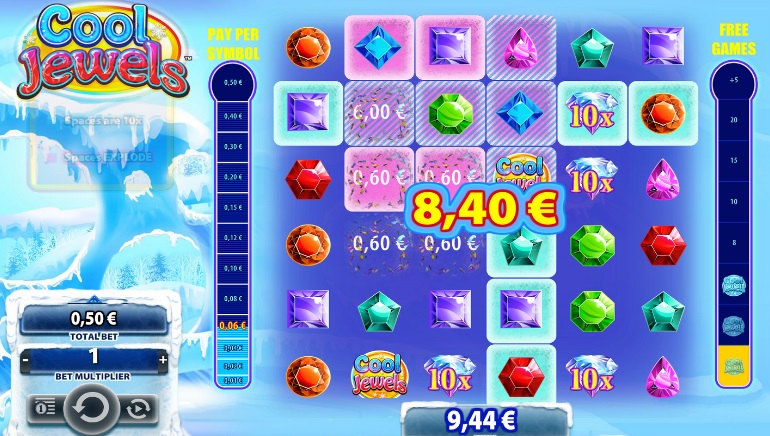 Enjoy a video slot unlike any other with more reels, no paylines and various features!

Williams Interactive has just unveiled its hot new game Hot Jewels that uses the innovative Exploding Pays engine to create an incredibly fun video slot which quickly stands out from the rest.

Being a subsidiary of Scientific Games, Williams Interactive made sure that the launch was one to remember as Cool Jewels was released on WMS Gaming at the same time and it became available online, in-casino and on the social gaming platform. It is the first ever slot to launch on both the online product and in-casino simultaneously.

As the name suggests, the video slot is all about jewels and precious stones. The background theme is set in a snowy environment to make sure that the temperature of the jewels remains cool at all times.

While there are many symbols that can be found on the reels, Cool Jewels does not have a set symbol hierarchy like most other slots. Each symbol pays the same when it appears in groups of four or more on the screen.

The first thing that will stand out is the fact that Cool Jewels has six reels, six columns and no paylines. When winnings groups appear on the reels, the pay for symbol increases based on the ranking on the side of the screen. Furthermore, the Cascading Reels feature makes the symbols explode after they grant the payout and other symbols fall in their place in order to provide additional chances to win with the same bet.

Wild symbols give additional winnings when they are part of the combination and can make for big consecutive wins that increase the pay. Multipliers and free games add even more ways to increase the prizes and make Cool Jewels a slot unlike any other currently available on the market.