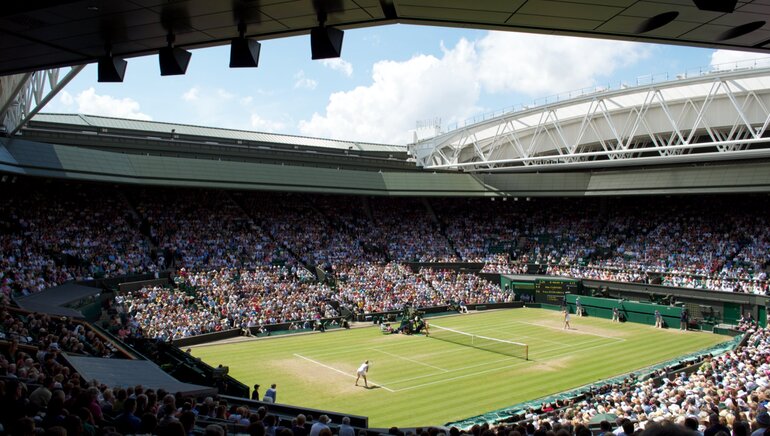 The opening matches of the 2022 Wimbledon tournament are underway, with former and reigning champions scheduled to play in the first rounds.

Another Grand Slam is on the way and those who enjoy tennis on grass will surely appreciate every second spent watching Wimbledon. Djokovic and Nadal are expected to make a deep run in the tournament and potentially win it, while Iga Swiatek stands alone as the favorite in the women’s tournament. The first week brings some exciting matches, with former winners and upcoming players in the spotlight.

Djokovic dropped a set in the opening match but he was never in danger and he’s expected to storm through the second round. The match is scheduled for Wednesday afternoon with bet365 sports offering odds of 2/5 on the Serbian champion to defeat Kokkinakis 3-0.

Rafael Nadal faces Cerundolo in the opening match and the Argentinean has a terrible record on grass. Even if this was his favorite surface, the Spanish champion would start as a firm favorite, as reflected by the odds of 3/100. A 3-0 victory for Nadal will deliver slightly better odds of 2/5.

Rough Starts at Wimbledon for Alcaraz and Tsitsipas

Alcaraz was on the verge of suffering an untimely elimination at the hands of Struff, the same player that eliminated him from Roland Garros last year. The Spanish phenomenon needed five sets but was never confronted with a match point and is expected to defeat Griekspoor as suggested by the odds of 2/5.

Tsitsipas is far from being at home on the Wimbledon grass, but he just won a tournament on the surface. Time will tell if he makes a deep run in London, but he should clear the opening round against Ritschard. You only get odds of 1/100 on the Greek to win, but a slightly better value of 9/20 on a 3-0 scoreline.

Williams and Halep Return on the Grass they Conquered

Serena Williams finds herself in the unenviable situation of playing at Wimbledon after an entire year without a match. She suffered an injury last time in London but is still expected to win against the inexperienced Tan, with 1xBet offering Williams odds of 7/20 and 5/2 of the Frenchwoman.

Halep retired from Bod Homburg and after three days of rest, she should be fit enough to deal with Muchova. The former Wimbledon champion is nowhere near her best form, so odds of 7/20 are justified. The Czech player will pose a stern challenge and you get odds of 5/2 on her to cause an upset.

Emma Raducanu and Kerber Set for another Grand Slam Win

Kerber prevailed on the Wimbledon grass in a memorable final against Serena Williams, but she’s unlikely to make such a deep run in 2022. The German is in good form and starts as a clear favorite with odds of 7/20 against Linette, a player famous for pushing matches into three sets.

Emma Raducanu stunned the world with the U.S. Open triumph but failed to meet the high expectations in the months to follow. She’ll enjoy the support of the fans at Wimbledon and she is capable of defeating the more experienced Garcia. Raducanu is priced at 3/5 by 1xBet and Caroline gets odds of 13/10,

The odds mentioned here were accurate at the featured bookmakers at the hour the article was written, respectively on Tuesday, June 28 at 8 A.M. UK time.