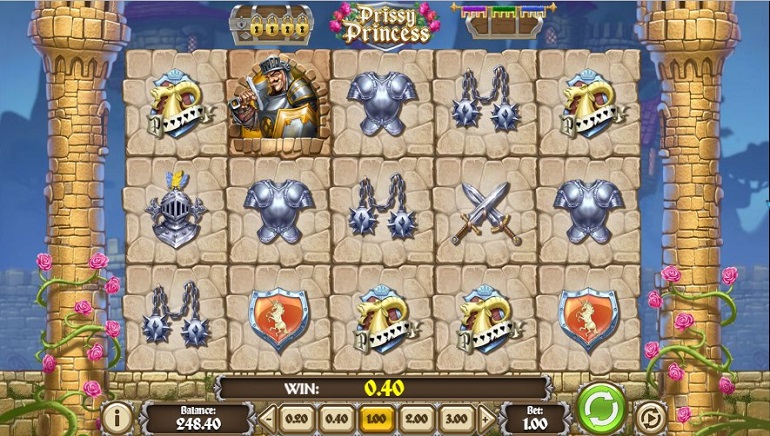 Prissy Princess is the latest Play'n GO slot, giving you a chance to taste the middle ages and fight for the affection of the beautiful princess.

If you enjoy the medieval stories of princesses, knights, dragons, bravery, and chivalry, you'll absolutely love the latest Prissy Princess slot by Play'n GO. Featuring the middle ages motives, exciting gameplay, and cartoon-like but amazing graphics, Prissy Princess is certain to find its fan base among players.

For the Love of the Princess

Most medieval stories revolve around winning the affection of a fair maiden who, although beautiful, is usually a bit whimsical. That's exactly the notion Prissy Princess draws on, featuring gallant knights and mighty (but hilarious) dragons fighting for the princess' affection.

The game is set on the backdrop of an ancient castle, with some nicely done animations of dragons breathing fire and the beautiful princess teasing her suitors. Symbols are what you'd expect to find in the game featuring a medieval theme, with armors, shields, swords, knights, and dragons.

The game features a relaxed and playful atmosphere, accompanied by a fitting sound theme.

The Prissy Princess slot is riddled with exciting features, different from what you'll find with most slots. The main one is the Crumbling Towers feature, where all reels containing a winning payline symbol will fall through, making way for new reels. If you manage to get four winning reel combinations during the Crumbling Towers, you'll remove the locks from the Treasure Chest, where you can win big cash prizes (up to 100x the bet or 5x the win).

Colorful banners are scatters, and if you collect all three of them during the Crumbling Towers, you'll initiate the Tournament bonus feature, which really gives this game a special flare. During the Tournament, knights and dragons will compete to win the hand of the princess, trying to best each other in various challenges (playing an instrument, shooting arrows, etc.).

Overall, this 20-payline game comes as a real refreshment in the world of online slots, and if you are in a mood to try something a bit different, Prissy Princess, which will be available in Play'n GO casinos like Casino Cruise, Video Slots Casino and BETJOY Casino from February 23, is the game for you.