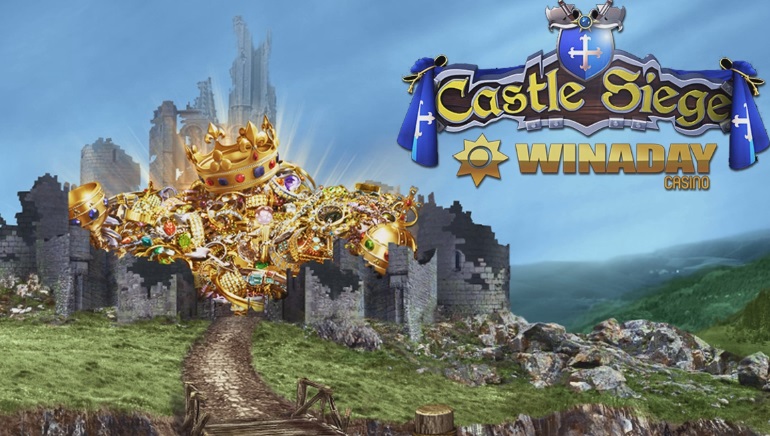 Castle Siege is a new video slot that will bring medieval excitement to the players of WinADay Casino.

WinADay is one of the rare examples of an online casino that actually develops its own software and games. And the latest addition to the game selection is the brand new Castle Siege slot, which was unveiled on Thursday 18 December. Alongside the potential for generating winnings, players are also promised an epic quest as they battle their way through the experience.

The name of the slot suggests a medieval theme, which is why WinADay has included stylish lettering, crowns, and goblets, along with a large castle in the background. Another aesthetic element is the music, which sounds like what you might have heard in countless medieval movies. As for the core design of the slot itself, WinADay has opted for the trusted five-reel design. Across those five reels, there are three symbols on each and 30 paylines.

The betting structure is one that lets players set the coin value at a number of options going from $0.02 to $0.25. Then, the next stage is to activate 10, 20, or 30 paylines. Finally, the betting level can be set anywhere from one to five. Players have a wide degree of control over the values of the bets they place.

An important outcome occurs when a wild symbol lands on the reels while the trumpets are out and all of the flags are folded. Should this happen, free games will be awarded to the player. And during those free games, the wild symbols will turn sticky. Notably, this is the first WinADay slot to feature sticky wilds.

More important than the sticky wilds is the special Catapult bonus game. Basically, this is a bonus game that will challenge the player to knock down the castle displayed in the background, behind the reels, using a catapult. One of three local jackpots can potentially be won.