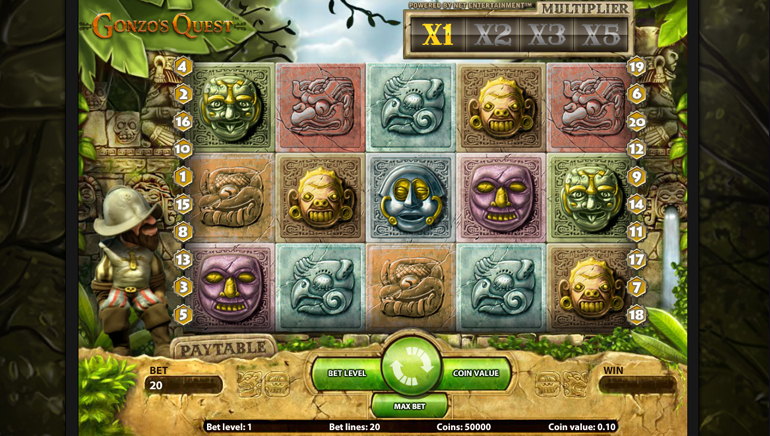 Winner Casino has added some popular NetEnt games in the form of Gonzo’s Quest, Starburst, and other creative titles.

Net Entertainment (NetEnt) is responsible for developing some of the most popular online slots in the industry, including blockbuster titles such as Jack Hammer 2, Aliens, Blood Suckers, and Scarface. Winner Casino has decided to expand its gaming selection by adding some popular NetEnt games to its catalogue. Two of the standout names are Gonzo’s Quest and Starburst, both of which are outlined below.

Brand new to Winner Casino is Gonzo’s Quest, a video slot featuring an explorer searching for El Dorado – the legendary lost city of gold. After an impressive intro video, the 3D slot plunges the player deep into the stifling South American jungle to start the quest for the lost gold.

Design-wise, the slot is of a relatively standard five-reel construction. And with three symbols displayed on each reel, the game can display 15 in total. Gonzo’s Quest features a total of 20 paylines, with payouts coming with three or more of the same symbol. It’s tough to find fault with such an imaginative game as this one.

Starburst is easily one of the best-known games to be developed by NetEnt. The visuals are rather understated but impressively executed, nonetheless. The glittering gems on the screen really do catch the eye.

The slot consists of five reels and up to ten paylines can be activated. One of the most lucrative features of the slot is that the Starburst wild symbol will let you win in both directions across paylines. But aside from the wild symbol, Starburst is lacking a bonus round.

Where to Find Them

Right now, the new NetEnt games can be found in the Vegas and Games tabs of Winner Casino. But give it a little time and we also expect them to be added to the slots tab.

Jack and the Beanstalk New to Winner Casino