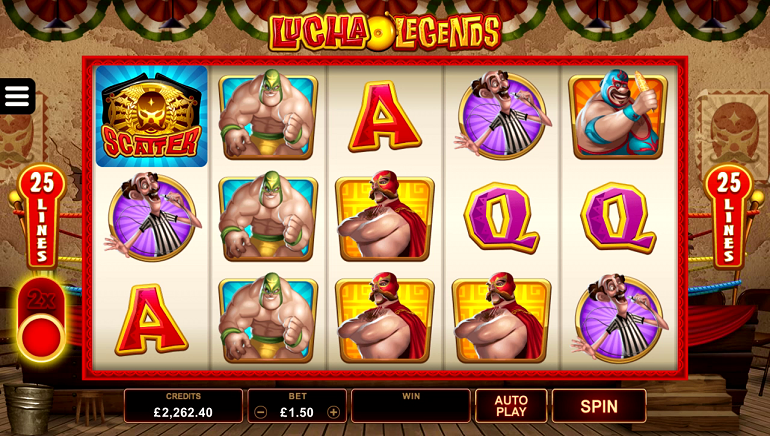 Mexican wrestling is the name of the game in Microgaming’s new slot, Lucha Legends, which is live at participating casinos from November 2018.

Microgaming has stepped in a bold new direction with the November 2018 release of the software provider’s brand new slot game, Lucha Legends. In this particular slot, Microgaming has elected to explore the field of Mexican wrestling, having previously covered themes such as history, food, sport, and fantasy.

For the uninitiated, Mexican wrestling is a bright, colourful affair that diverges from the muscle-bound spectacle that emanates from the U.S. Mexican wrestlers are most notable for wearing masks, while some will even go so far as to wear capes. As such, the Lucha Legends slot will deliver on all of those expectations at Microgaming casinos.

Lucha Legends is a slot with five reels by three rows, thus delivering 15 symbols for each spin. Those can appear in various combinations on the reels, with the symbols aligning in different ways to pay out winnings along 25 fixed paylines. Ultimately, it shall be possible to play Lucha Legends on either desktop or mobile, including Android, iOS, and Windows.

To add some flavour to the game, Microgaming has come up with a cast of Mexican wrestlers to appear as the principal symbols. Their names are Burro, El Diablo, Marito, Pepe, and Sal. Each wrestler even has a signature move that can lead to the Super Wild feature being triggered.

Starting with Super Wild, this feature can arise during the base game, with standard wilds becoming enhanced. If they do become Super Wilds, then players will receive a 2x or 3x multiplier, with another alternative being the inclusion of two extra wild symbols. Look for wilds to become super during free spins.

Microgaming has also engineered a Power Up Mode that can be activated from playing the base game and building up the on-screen bar. Not only can Power Up Mode lead to bigger prizes, but also it can be transferred over into free spins once they have been triggered.

At that point, the total bet shall be doubled to potentially increase players’ winnings. On top of that, the slot will also hand out a 3x or 5x multiplier, but another option could be the awarding of four wild symbols.