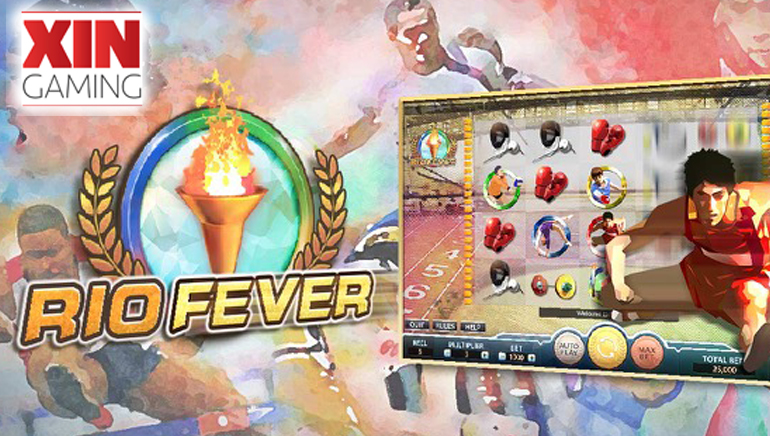 Get the full feeling of Olympic glory with the newest slot from XIN Gaming.

XIN Gaming is the leading iGaming software developer in the Asian gaming sector and they have just released a brand new slot that is themed after the Rio Olympics. The opening ceremonies in Brazil got underway just a couple of days ago and the new slot was just released in perfect timing.

Rio Fever is a five-reel, 50 payline video slot that is based on the 2016 Rio Olympics. The game has players match symbols that represent a number of the sports events at the games right now. Players will be swept into one of the brand new Olympic stadiums in Rio de Janeiro with incredibly realistic graphics and sounds from the games.

There may not be real gold, silver or bronze medals on the line, Rio Fever offers a massive jackpot, incredible bonus offers, free spins and much more. It is exciting and very fun to play, especially with Olympic fever in the air right now.

“Rio Fever is such a fun game and will really be a great opportunity for people that love sports and playing slots to enjoy both at the same time." Related Mathias Larsson, CEO of XIN Gaming. “We are so excited about the start of the Games, and we hope sports fans everywhere will warm to Rio Fever," he continued.

XIN Gaming has been focused on sports themed gamed for the last couple releases with the summer hit, Euro Football Champ released with the beginning of the 2016 Euro Championship. They hit the nail on the head with that one and Rio Fever sure does look like another winner.

XIN Gaming made big headlines just a few days ago when the news went public that they had acquired Tain and Betting Promotion for a cool $10 million. Obviously a company on the grow, XIN Gaming has its eyes set in the right direction.