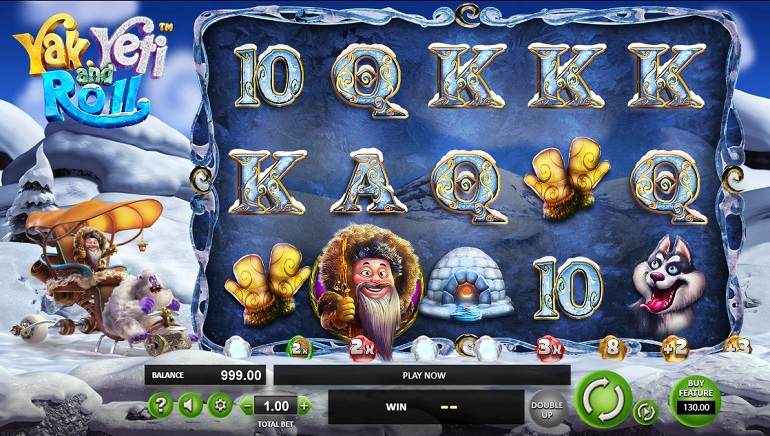 Yak, Yeti and Roll is a winter-themed slot from BetSoft Gaming and includes cascading symbols and a prize trail.

Confirmation has emerged that BetSoft Gaming plans to release its brand new Yak, Yeti and Roll slot imminently on Friday 14 December 2018. Starring a yak and yeti, the video slot shall be fully embracing of a winter theme and will soon be instantly playable over a number of devices, including desktop, Android, and iOS, at participating BetSoft casinos.

The story is one that focuses on an Eskimo inventor and a friendly yeti. The pair are travelling across the arctic tundra and encountering many types of symbols along the way, such as playing cards and winter imagery. By design, the symbols are intended to drop down onto the five reels and three rows. Players will then be granted winnings if they can hook up the symbols over the 20 fixed paylines.

The symbol-dropping slot design is one that will cause paylines to disappear if they have deliver winnings. As a result, the symbols above will drop down in a cascade to fill the gaps, and then new symbols will fill the gaps above. Ultimately, this cascading design aspect has been included for the purpose of a pivotal special feature.

The Yak, Yeti and Roll Bonus Trail is a special feature that becomes relevant during any winning streaks. By racking up some consecutive wins, players can unlock different perks that are denoted by the cascade system that has been implemented. Multipliers crop up quite commonly, while some of the other perks include free spins and cash wins.

The wild symbol is the friendly Yeti, who can land on reels two, three, and four to substitute for almost every other symbol barring the Eskimo scatter. Something for players to also bear in mind is that the free spins will not close off the chance to continue advancing along the snowmobile trail.