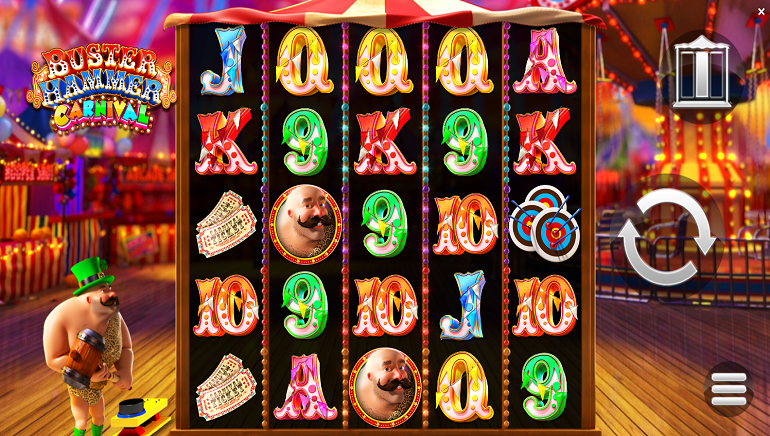 Buster Hammer Carnival is a new slot from Yggdrasil & ReelPlay, where a circus strongman hammers out wins of up to 34,816x the stake.

Buster Hammer Carnival is the latest online slot to star a popular cartoon circus strongman. It's the work of Yggdrasil and their YG Masters partner ReelPlay. This cartoon-style game comes in desktop and mobile formats and plays out over a 5x5 grid of circus-themed symbols. During a free games feature, the grid expands, giving players 32.768 ways to win.

In the base games, the 5 reels of the Buster Hammer Carnival feature 3,125 different ways to win. The high standard of artwork is carried over from the original game, with Buster joined by stylised playing card symbols, circus tickets, arrow targets, and tasty-looking hot dogs. An animated Buster stands to one side among the colourful stalls and bright lights of the carnival.

Each time a wild symbol appears on the reels, Buster hits a Striker with his hammer. Gold wilds can appear, and if Buster uses enough of his strength, they can expand across reels for some big wins.

Scatter symbols trigger a Mighty Free Spins mode, where the reels expand from 5 to a huge 8 rows high, to create 32,768 winning ways.

Join Buster On PCs Or Mobiles

The style and features are the same across desktop and mobile versions. Buster Hammer Carnival is a medium to high volatility game with average returns of 96.338%, and players can spin the reels for between 1.00 and 25.00.

David Johnson, CCO at ReelPlay, said: “As part of the YG Masters initiative we’re able to rapidly scale up our roadmap and unveil games to new partners with regularity and consistent success.

“We’re very fond of Buster and had some fun with his animations in this title where we extended his cheeky character. On top of this, all the key elements ReelPlay are known for are firmly there and we’re excited to see how Buster Hammer Carnival is received by players accessing the game via Yggdrasil’s operator partners.”