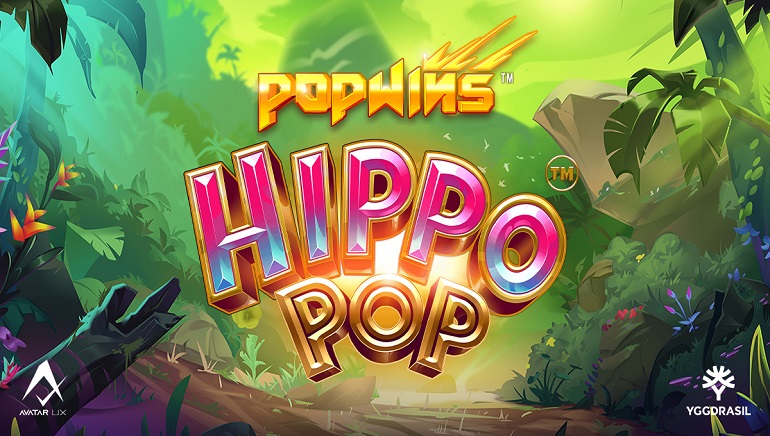 Win ways growing up to 65,536, increasing win multipliers, and potential to produce some really big wins make HippoPop slot one of the more interesting new games in the market.

AvatarUX, one of the studios in Yggdrasil's YG Masters partner program, has come up with a fresh title to add to the very popular PopWins series. Named HippoPop, the colorful slot features neon animals coming to life, bringing psychedelic atmosphere and promising exciting and rewarding gameplay.

The game pays both ways as long as there are matching symbols on adjacent reels going from left to right or right to left. Each new spin starts with 486 ways to win, but every win will explode the winning symbols and expand the reels, increasing the number of win ways.

The bonus feature in HippoPop is similar to the one in other PopWins titles. To trigger the feature, the player needs to grow all the reels to the maximum height, which is six symbols in the base game. All wins after this will increase the win multiplier, which will be carried over to the bonus.

During the bonus, all wins increase the win multiplier and after every series of wins, reels are reset to the lowest height. The maximum height to which reels can expand in the bonus is eight, and unlocking all the reels adds two extra spins to the feature.

The bonus feature can be a bit difficult to trigger, so those who don't like waiting can straight up buy it for 85 times the base stake. Before the bonus starts, the game offers a chance to gamble the spins on the bonus wheels to try and reach the maximum number of 12 spins.

With great graphics and upbeat soundtrack, combined with great potential and solid RTP of 96.1%, the latest addition to the PopWins series is almost guaranteed to create some buzz across the iGaming world.