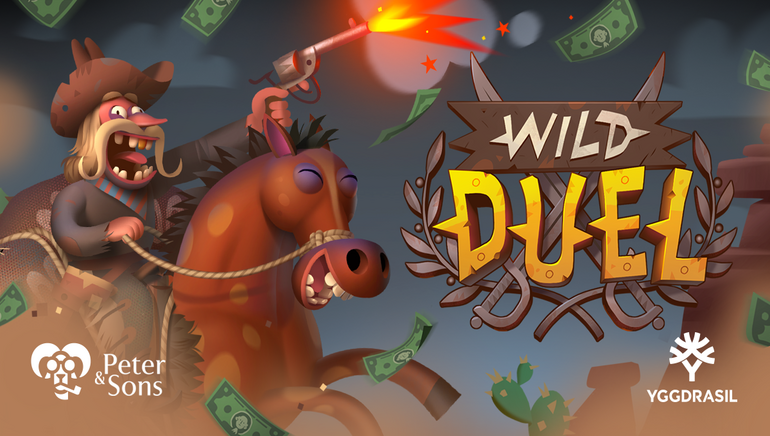 Protect the frontier in Wild Duel, the latest slot developed by Peter & Sons and released to online casinos through the partnership with Yggdrasil.

Yggdrasil and Peter & Sons are two of the big players in the online gambling industry. The leading publisher and the respectable software developer shook hands to create one amazing video slot called Wild Duel. Just as the name indicates, the game takes players on a virtual trip to the Wild West, where bandits have laid siege to Wild Town. Players who dare to confront them and defend the frontier location will be rewarded with big payouts by this high volatility slot.

Yggdrasil games are famous for their amazing graphics and immersive gameplay, something that Wild Duel is particularly good at. The slot has a 5×3 structure, which is pretty standard, but the features and modifiers are quite exceptional. Wild symbols can pop up on any real and if you discover a minimum of two scatter symbols, you will trigger the Wild Duel. It is during this mini-game when we spins can be claimed, while Outlaw Reels and Marshall Reels lock horns in a memorable dual.

The confrontation between the outlaws and the marshals will produce multipliers that are randomly awarded, regular Wilds, as well as sticky and expanding ones. As long as the Marshall wins the duel, players will keep grabbing respins and there is no upper limit to how many duels can be settled. If three scatter symbols land during the free spins, the duel feature is unlocked. The fact that players get another spin for every winning due makes the entire gaming experience far more exciting.

Peter & Sons are on a Releasing Spree

Peter & Sons is a prolific software developer and Wild Duel is only the culmination of an impressive lineup of games. The company released Xibalba and Monster Blox Gigablox™ not so long ago, slots that are already popular at online casinos. This partnership with Yggdrasil represents an important milestone for them and provides the means to push their creativity into overdrive. The rapid and successful distribution of games is also beneficial for punters who enjoy immediate access to the best games.

Stuart McCarthy, Head of Product and Programs at Yggdrasil was the first to acknowledge the huge success of Wild Duel. He expressed his confidence in the success of future releases and praised Peter & Sons for its attention to detail and originality. This game pits courageous players against virtual outlaws and sets the stage for an epic confrontation between the bad guys and the marshals. There are plenty of other slots in development, with equally creative teams, so the future looks particularly bright.