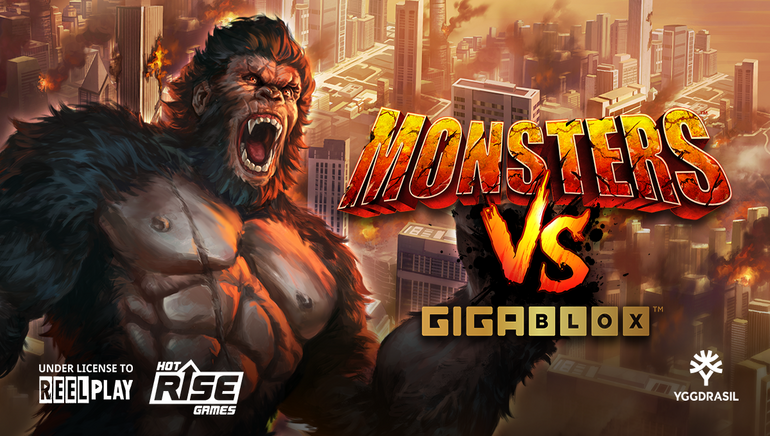 Monsters VS Gigablox™ is the latest slot to be added to Yggdrasil’s portfolio, a slot developed by Hot Rise Games and using the Game Engagement Mechanic.

Hot Rise Games’ Monsters VS Gigablox™ is the latest slot to be enjoyed this summer, a brand new title with immersive gameplay. The international release of this slot is the result of the partnership between Yggdrasil and ReelPlay, and it is one of the most anticipated slots of the year. Right from the start, players will be impressed by the 6x6, 50-payline grid and the original theme of this game.

Bigger is Better in Hot Rise Games’ Monsters VS Gigablox™

Size matters in this fascinating slot, which has a unique game structure and an extended pay line grid. Just as the name indicates, the slot uses the Gigablox™ Game Engagement Mechanic (GEM). As a result, players will notice an oversized symbol landing on each spin, covering a sector of 2x2 or up to 6x6. Even the symbols populating the reels depict huge creatures that are waging a fierce battle with a devastated city in the background.

Punters should keep their eyes open for the golden crown, which serves as the wild symbol and can substitute any other sign on the reels. The “VS” is the scatter symbol, and you need at least five of them to produce free spins. The beauty of this scatter is that it also serves as a paying symbol in addition to triggering the bonus rounds. You can unlock a maximum of 40 spins, and the chosen champion is the monster that pops up the most often during the bonus round.

During the free spins, monsters are the only Gigablox™ symbols, and the ones that become champions will pay double if wild symbols are involved. Depending on the country from where they play, punters can activate the feature allowing them to jump straight to the bonus round. The price to do so is 75 times the bet, but it acts as an effective shortcut to the most exciting part of the game.

A Fine Addition to the YG Masters Portfolio

Stuart McCarthy, Head of Product & Programs at Yggdrasil, hailed the arrival of Monsters VS Gigablox™, the latest Hot Rise Games title. The slot follows the successful release of Legon – Hot 1 and uses Yggdrasil’s state-of-the-art technology GATI. The partnership between ReelPlay and Hot Rise Games has delivered another gem, as the slot is an excellent addition to the YG Masters portfolio. If you enjoy an original slot with an apocalyptic theme and high-paying mechanics, Monsters VS Gigablox™ is a slot you should play this summer.