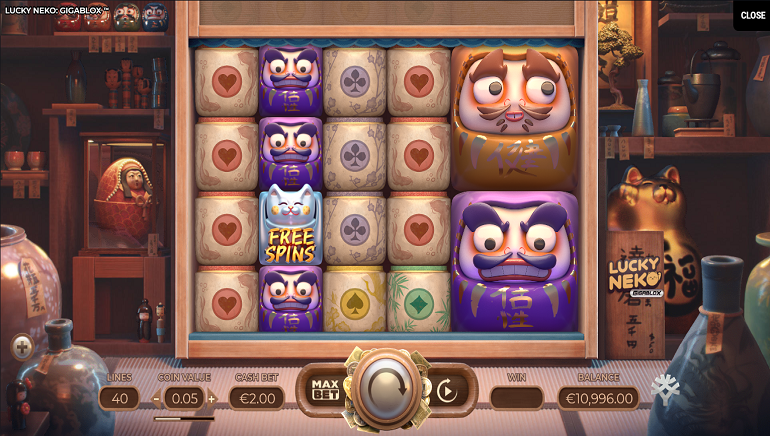 Daruma dolls can be matched on up to 85 paylines when free spins are triggered on the new Lucky Neko Gigablox™ slot from Yggdrasil.

New for summer 2020, Yggdrasil has released the Lucky Neko Gigablox™ slot. The central concept of Lucky Neko is the embrace of the Daruma doll of Japan. Created as a celebration of the founder of the Zen tradition within Buddhism, the dolls are often red and gold, bearing quirky and expressive faces designed with dark lines.

Lucky Neko has been built as a six-reel slot with four rows. There’s room for 24 individual symbols to appear, but Yggdrasil has included symbols that are big enough to fill multiple positions. In-game wagering is rooted in a system of staking coin values of €0.002 up to €2.50 on 40 fixed paylines.

A minimum bet of €0.08 can be staked on Lucky Neko and the highest can be set at €100.00 with participating casinos online. Yggdrasil has also added an auto-play feature with options to assign from 10 to infinity spins.

In the base game, the Gigablox™ feature is one that can apply on every turn, with each and every spin potentially landing to cover 2x2, 3x3, or 4x4 positions on the reels. Yggdrasil’s programming has ensured that Lucky Neko will run with 81.5 volatility and 96.4% RTP while offering compatibility on desktop or mobile.

Free spins can only begin once five or more special symbols are landed. One free spin will be given for each symbol and the special feature will also cause the reels to double in rows from four to eight. Once activated, there will be 48 symbol positions, 85 fixed paylines, and the ability to win up to x6950 during free spins.

In free spins, one symbol will even be designated as the Blessed Symbol and turn into a x5 multiplier. A further benefit is that Gigablox can now increase to fill 5x5 or 6x6 places on the reels. Finally, there are gold cat wilds to substitute for regular symbols.