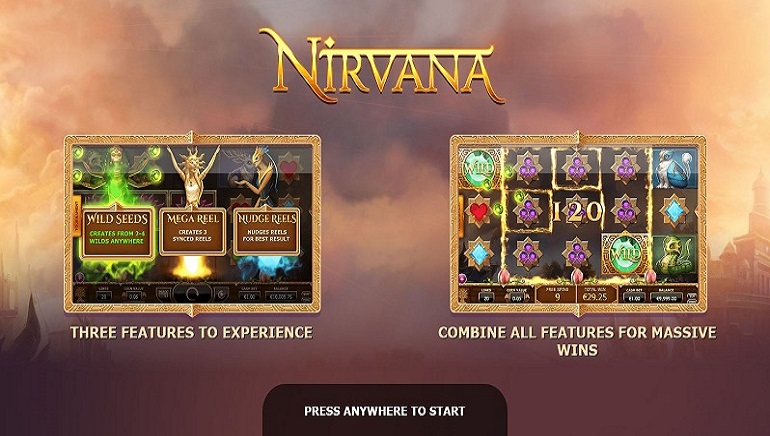 Yggdrasil Gaming's newest slot release, Nirvana, takes players on a quest for inner calm while collecting cash and bonuses along the way.

Yggdrasil Gaming is on a quest to bring their players inner peace with their newest slot release, Nirvana. The Nirvana slot game features three goddesses, fantastical characters and lots of fun special features. Nirvana can be played both on desktop and mobile at Yggdrasil-powered casinos such as Mr Green Casino, Euro Lotto Casino and Vera and John Casino.

Nirvana is a 5-reel, 3-row slot with 20 paylines and eight base symbols, not including wilds and free spins. Magical creatures on the reels include a rabbit with antlers, a cat/bird combination, a phoenix and more. The return to player percentage is a stunning 96.2%, which means that the chances for both spiritual peace and monetary income are high.

Yggdrasil’s Nirvana features a free spins mode, which is triggered when three or more free spin tiles appear on the reals. During this mode, players get 10 free spins and can choose a free spin feature: Wild Seeds, Mega Reel or Nudge Reels.

In Wild Seeds, every spin is boosted by two, three or four wild symbols, giving players more chances for winning. In Mega Reels, reel two, three and four sync up as they spin, producing the same winning combinations. In Nudge Reels, after the reels have landed, one reel will be nudged down in order to get a bigger win.

If players hit three or more free spin tiles during the free spins mode, the counter will reset itself to give an additional 10 spins and players can then choose one of the three special features again.