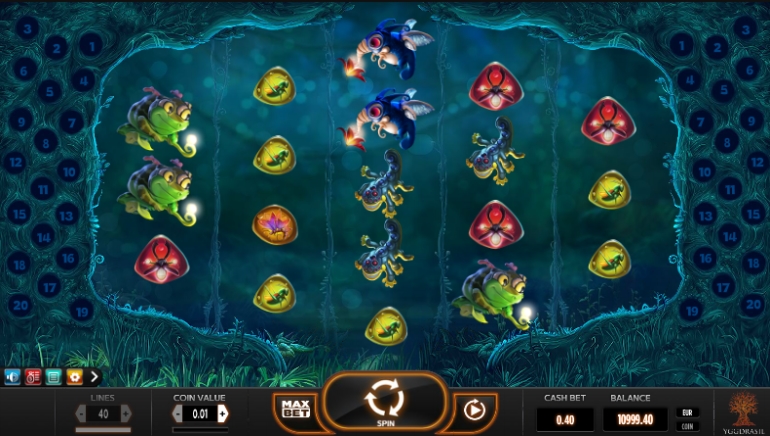 Magic Mushrooms is the latest release from Yggdrasil Gaming; it is the first-ever high performance slot to feature an unchronological draw slot.

Magic Mushrooms consists of the classic slot set-up of 5-reels and paylines, but the way these features are arranged is anything but standard! Most standard online slot games have paylines on one side and reels that stop in sequence. Magic Mushrooms, however, divides its 40 paylines into 20 from the left and 20 from the right, and they are spread across a diamond shaped 3-4-5-4-3 reel position. The five reels are drawn in an unchronological order of 1-5-2-4-3.

Special features include free spins, multiplier wilds and spreading wilds. The game also has unique audio and visual effects, which add to the fantasy-theme and the magical ambience. Its distinctive sounds and music were created by specialist sounds artists, and the characters of the slot were created in-house and first modelled as clay figures before making it to the big screen.

Fredrik Elmqvist, chief executive of Yggdrasil Gaming, commented, “There are plenty of slots out there based on aliens and zombies but this is the first that uses spreading and multiplying wild Magic Mushrooms.

“This game is unique in every way, from the reel structure and the characters we’ve created to the sounds and music we’ve encapsulated. Players will love it!”

Yggdrasil Gaming has produced a number of popular casino games, including the new release Fruitoids, the high-roller video slot Winterberries, the ever-popular Jokerizer and Lotto7, a daily lottery draw that allows players to play for a €2.5 million progressive prize.

Yggdrasil Gaming has offices in Malta, Poland and Gibraltar. In the past year, they have signed agreements with a number of household names including Mr Green, Vera&John, Cherry Gaming, ComeOn! Casino and Unibet.