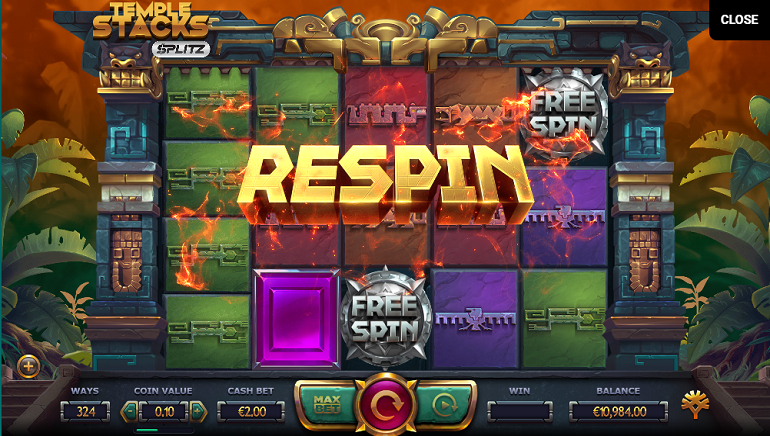 Temple Stacks is the first Yggdrasil Gaming slot to launch with the brand new Split Mystery Stacks, which can potentially divide into 12 symbols after landing.

Yggdrasil Gaming has completed the release of a brand new video slot that comes with an innovative Splitz mechanic that will provide players with up to 248,832 ways of winning, which are known as pay ways.

The newly released Temple Stacks slot is mobile-compatible and takes place in an Aztec setting. An interface with five reels and three rows is placed in front of a temple wall and the game will start by offering 243 ways of winning.

That number can change, however, depending on whether Splitz Mystery Stacks appear on individual reels. Each Splitz can cover a full reel and then display up to 12 matching symbols. This will change the current number of ways to win, as shown by the on-screen “Ways” counter.

Various Aztec symbols and standard colours are used as symbols that can be matched for winnings. As for wagering, the coin value can start from €0.005 for a €0.10 minimum bet, while the maximum €1.00 coin value equates to a €20.00 overall bet.

Yggdrasil has also included a Free Spin symbol that can also act as a wild symbol. Basically, this works by acting as a substitute when only two symbols have landed. A further benefit is that both symbols will become sticky and deliver a re-spin to the player.

If at least three Free Spin symbols appear, then this will trigger standard free spins and the provision of winnings. Four levels have been included for the feature, which improves and becomes more rewarding every time it is unlocked.

The slot works intuitively to display how many spins and Splitz a player is entitled to. For instance, it can be possible to receive seven gold free spins and also have anywhere from six to 12 Splitz Mystery Stacks included as well.