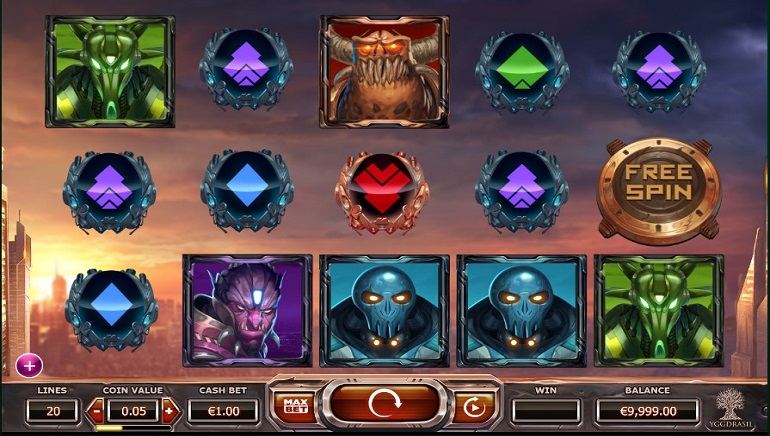 Super Heroes is an epic new gaming experience that is packed with big moments. Players can unlock an array of dazzling features in this Yggdrasil slot.

Yggdrasil Gaming has been hard at work at developing a cutting-edge video slot that is packed with epic moments. From October 2015, Yggdrasil sites like Cherry Casino, Interwetten Casino, and Video Slots Casino will be able to share Super Heroes with their players.

When the slot loads, it instantly demands attention for its action-packed video footage, which is used to introduce a cast of characters. The best comparison is that they look like the characters who appear in the popular video game Overwatch. After the video finishes, the slots loads up to show a city sky-scape with the symbols overlaid.

A total of 15 symbols are displayed on the interface, which is made from five reels and three rows. Then there are 20 fixed paylines to win from, with players able to win more if they match character symbols rather than the shapes and colours that are used to represent factions.

Yggdrasil has made sure players have plenty of wagering options, as the coin value starts at €0.01 and allows for a €0.20 minimum spin. There are several other coin values above that, with the €5 option equating to a €100 maximum spin. Before spinning at the highest bet, players are made aware with an on-screen message.

The features begin with a wild symbol to fill in for all others except for the free spins, which can be unlocked with three or more of these symbols. In this feature, players will have a 2x multiplier at minimum while the Super Hero feature is also unlocked.

Normally, the Super Hero feature is triggered at random, but whenever it begins two random heroes will appear at either side of the screen. The heroes begin with a level that can be increased for greater rewards, but more of their symbols need to land on the screen.