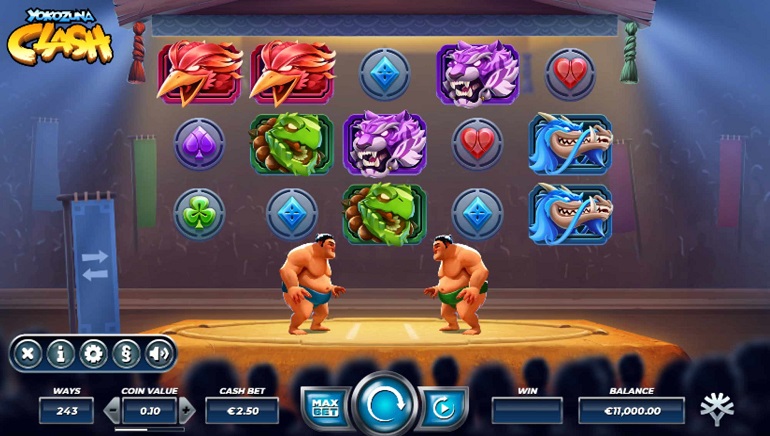 Yggdrasil is taking on the world of sumo wrestling in its brand new Yokozuna Clash slot, which includes free spins and the chance to win 86,000 coins.

Yokozuna Clash is yet another example of how video slots can tap into highly diverse cultures. Coming from Yggdrasil Gaming, the Yokozuna Clash slot is a gaming experience that’s inspired by the Japanese combat sport of sumo wrestling.

Originating in 1684, sumo wrestling has survived for hundreds of years and still attracts a healthy crowd of spectators to watch participants battle it out in the dohyo. Professional sumo wrestlers ultimately aspire to become a grand champion and earn the highest rank of yokozuna.

Yggdrasil has redesigned the iconic dohyo ring to appear in slot form, with two hulking combatants facing off against each other amid a shadowy arena filled with spectators and nobori banners flying. The actual slot interface takes the form of five reels by three rows and appears just above the ring.

The responsively designed slot is capable to adjusting to different screens and platforms, including the likes of Android, iOS, iPad, MacOS, and Windows. Base game symbols can be lined up in adjacent reels from left to right, rather than fixed paylines, with a total of 243 ways to win.

Tournament Free Spins can begin with two of these special symbols being landed in view. Random sumo wrestlers are then chosen, with the aim being to win from left to right and use symbols to defeat the opponent. Winning from right to left, meanwhile, can push the player back across the screen and could end up in defeat.

An array of wrestlers with various wild and multiplier benefits can be used up until the Final Fight stage against the main Yokozuna. A further element is the Sumo Clash feature, which triggers two to four extra symbols when a five-reel win occurs. Ultimately, Yokozuna Clash has the potential to provide a maximum win of up to 86,000 coins.